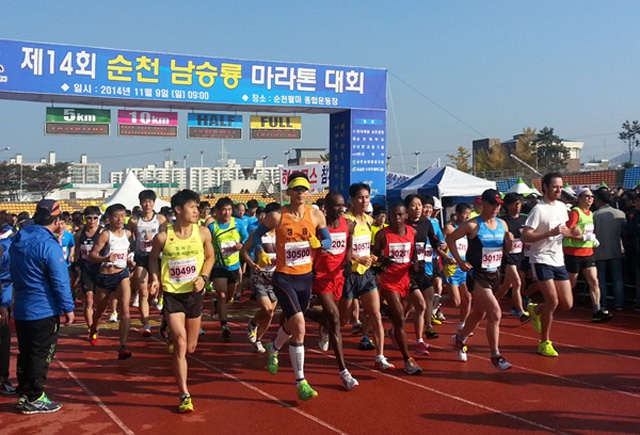 A total of 9,023 runners from all over the world took part in this year’s Suncheon Namseungryong Marathon, in South Korea running either the 21 km half marathon, the 42km marathon or the 5km race. (Seychelles National Sports Council)

The Indian Ocean island nation was being represented by Simon Labiche, Jemmy Anacoura, Anna Barra and Maggy Harray. They were amongst a total of 9,023 runners from all over the world who took part in this year’s Suncheon Namseungryong Marathon, of which 544 ran the entire 42km race, 2,954 graced the half-marathon, 3,690 partook in the 10km race, while the remaining 5,000 contested the 5km race.

With Labiche who is Seychelles’ most successful long-distant runner in the last decade unable to defend his triumphant win in the 21km half-marathon at the same event in 2013, Seychelles’ best result was by Jemmy Anacoura who completed the 21 km race in an encouraging third place winning him the half marathon’s bronze medal.

Anacoura clocked 1 hour 18 minutes 02.20 seconds which was under eight minutes slower than the winning time.

"I was anticipating to finish among the top five but I did not expect to finish third," Anacoura told SNA in a phone interview who was attempting his first Suncheon Namseungryong marathon.

"I am happy to have come out third and I am satisfied with my results where I have improved my timing achieved running the same distance in the Seychelles Eco-Friendly marathon earlier this year."

Anacoura told SNA that he will keep on training hard which he does everyday and will see what happens next year if he gets the possibility to participate in either the Seychelles Eco-Friendly marathon or the Suncheon Namseungryong marathon.

Labiche on the other hand fall short of emulating the success attained last year due to a niggling thigh injury which prevented him from performing at his optimum best.

Not one to give up easily, he managed to run the grueling 21km race despite hurting, covering the distance in 1 hour 28 minutes 56.04 seconds in the end, over 13 minutes slower than the record time he attained last year.

Sadly he would watch helplessly as his one year-old record of 1 hour 15 minutes 57.89 seconds was also beaten, as this year’s new half-marathon winner completed the course in 1 hour 10 minutes 21.39 seconds, over five minutes faster than the old record.

The athlete was unavailable for comment upon returning to the country on Tuesday as he was met with a family emergency.

On the women’s participation, Barra who also ran the half marathon managed a commendable fifth place finish overall. She covered the 21km in a time of 1 hour 42 minutes 53.40 seconds, over 20 minutes faster than her last performance running the same distance.

The long distance runner told SNA that it was her aim to be amongst the top five to finish the race having been made aware that the top five runners in each race would be rewarded.

“It was difficult to remain in the top five throughout the race as I had trouble breathing with the temperature dipping below zero degrees at times. But I held on and persevered and I was rewarded for my efforts,” said Barra.

“I’m very happy of my result, especially since I ran the same distance in over two hours last year, despite running here at home,” added the joyous athlete.

Barra together with the other three athletes were selected based on their performance in the last Eco-Healing race organized in Seychelles in February last year.

In fact, the Seychelles Eco-friendly marathon which started in 2008 in the initiative of Seychelles honorary consul general in South Korea, Dong Chang Jeong who also heads the Seychelles tourist office there, in an effort to contribute to the health of Seychellois.

For Barra her timing achieved in the South Korean version of the marathon last Sunday has boosted her confidence and she is hoping to do well again in February in the next edition of the annual Seychelles Eco-friendly marathon to secure new qualification to go to South Korea for a second time.

The other female participant to attend the South Korean event also performed above and beyond reproach, pulverizing her old timing over the marathon by almost 38 minutes.

Maggy Harray was the only one to run the 42km marathon. Only her second time at these events Harray completed the race in 4 hours 47 minutes 21.37 seconds, with her previous best standing at 5 hours 25 minutes.

She was ninth overall in the women’s race with the winning time standing at 3 hours 26 minutes 09.91 seconds.

Harray who says she runs “purely for leisure” was particularly pleased with herself told SNA that “I sensed I had the legs to go under five hours over the marathon, but was not expecting to exceed my personal best by such a margin.”

Despite the race being demanding, she explained that she has fallen in love with long-distance running and would be back next February in the Seychelles Eco-Friendly marathon to keep pushing towards a new personal record.

Harry who won the 2012 ‘Crazy Challenge’ – a race which sees participants run round the Seychelles’ main island of Mahe winner has disclosed that she is intrigued by the prospect of a return trip to South Korea next year.

The official results of the Seychelles delegation at the Suncheon Namseungryong Marathon are as follows.