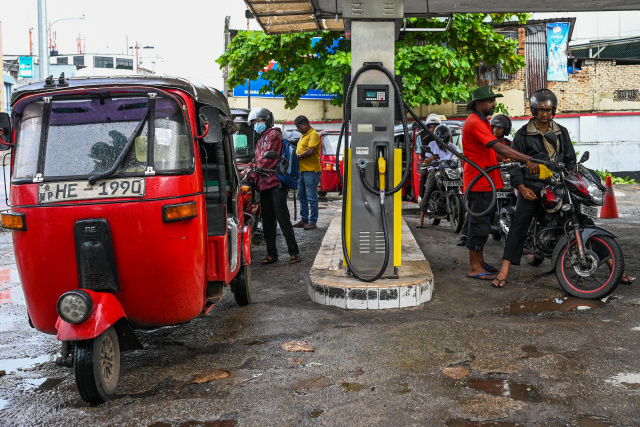 An employee fills petrol in a motorbike at Ceylon petroleum corporation fuel station in Colombo on October 17, 2022. Crisis-hit Sri Lanka slashed fuel prices on October 17, the second cut in as many weeks, after the World Bank warning that the economy will shrink an unprecedented 9.2 per cent this year. (Photo by ISHARA S. KODIKARA / AFP)

(AFP) - Crisis-hit Sri Lanka slashed fuel prices on Monday, the second cut in as many weeks, after the World Bank warned that the economy will shrink an unprecedented 9.2 percent this year.

The energy ministry said the price of petrol will be reduced by 40 rupees to 370 rupees ($1.02) a litre from Monday night after a similar 10 percent reduction earlier this month.

But the price of regular petrol is still twice the amount before the start of the crisis last year while diesel is three and a half times more than what it was in December 2021.

Earlier this year motorists spent weeks to get fuel, contributing to weeks of protests that forced president Gotabaya Rajapaksa to flee the country in July and quit.

The wait at the pumps has reduced to a few hours in recent weeks, but fuel is still strictly rationed because of an enduring shortage of dollars needed to pay for essential imports.

Public transport also ground to a halt due to a lack of diesel but now services are almost back to normal, although many fares -- in common with soaring prices for other services and goods -- have doubled.

Official annual inflation rates are running at close to 70 percent.

The latest lowering of petrol and diesel came after the World Bank warned that the economic contraction will be worse than the 8.7 percent forecast by the Central Bank of Sri Lanka.

The World Bank in its latest country update published last week said the economy will continue to shrink next year too. It expects a 4.2 percent contraction next year.

In addition to the Covid-19 pandemic and the Ukraine war, Sri Lanka's worst crisis since independence is also partly blamed on the sharp tax cuts announced by Rajapaksa after he came to power in November 2019.

The crisis forced the government to default on its $51 billion foreign debt in April.

Rajapaksa's successor, Ranil Wickremesinghe, has overturned some of the tax cuts and introduced new revenue measures.

But the package is subject to an agreement with creditors including China, Sri Lanka's biggest creditor, as well as to contain inflation and tackle corruption.