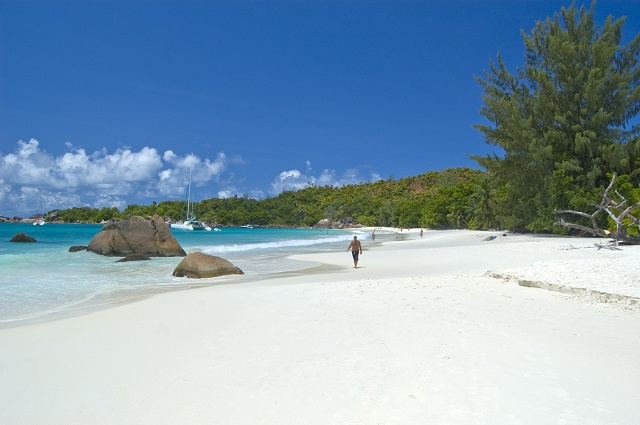 Francis said that the tourism department is looking to end the year with around 330,000 visitors. (Gerard Larose)

(Seychelles News Agency) - Seychelles has reached a significant milestone with the arrival of over 258,000 tourists from January to-date, surpassing the best-case scenario for visitor arrivals this year, a top official said on Monday.

In January this year, during its strategic marketing meeting, the tourism department outlined that the country was expecting the arrival of 218,000 visitors as a worst-case scenario or 258,000 as the best-case scenario.

At the time, the best scenario represented about two-thirds of visitors' arrival numbers in 2019 – the best year so far for the industry – when Seychelles welcomed over 380,000 visitors to its shores.

The principal secretary for tourism, Sherin Francis, told reporters that this milestone was reached on Saturday, October 15, most probably during the landing of the Emirates flight.

"Looking at the trend line, the current performance rate, and the momentum that has been set, we are looking to end the year with around 330,000 visitors. We have also noted that in the last three weeks we have been performing above the 2019 figure. This is for weeks 38 through week 40," said Francis.

Seychelles, an archipelago in the western Indian Ocean, recorded this milestone during the 41st week of the year, with 11 more to go. Surpassing 258,000 visitors means that the island nation has reached 89 percent of the 2019 visitors' arrival figure.

In terms of airline dynamics, with the winter schedule, Seychelles has seen the return of Condor and Aeroflot, which are supporting the recovery of the destination. It is also getting extra charter flights from Israel.

"At the time when we were estimating the figure, there were a lot of assumptions and one of them was the fact that we were still in a pandemic period and we knew the situation would improve, but we did not know how fast this would happen. We surely did not know that come February 24, there would be a war between Ukraine and Russia that would be affecting our number one market at that time which was Russia," said Francis.

She added that events worked out in the favor of the destination, because "when the war broke out, it coincided with the period when our traditional western Europe markets were starting to relax their COVID travel restrictions."

Cancellations from Russia and Ukraine were being filled in by western European markets.

To mark the milestone, the department organised a social media contest, in which visitors disembarking on the Emirates flight could participate.

Interested visitors had to take a photo with the tourism department team that was present at the airport on the day, and share the photo to their Instagram account using the hashtag #seychellesislands and mention @visitseychelles. They had three days to post the photo.

The winner of the giveaway, a 30-minute scenic helicopter tour of Mahe, will be chosen using a random generator. The winner will also be invited to a lunch in a prestigious resort on Mahe, the main island.