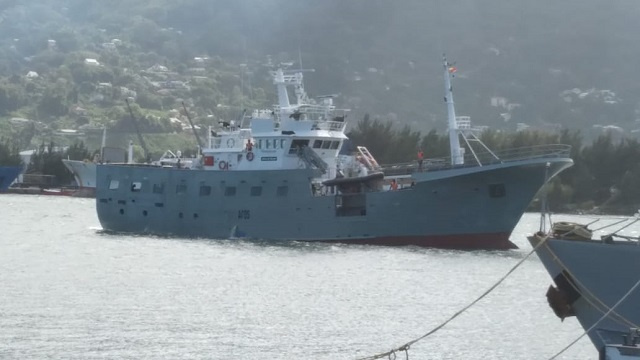 A crew of 29 members left the Seychelles Coast Guard (SCG) base on Mahe on Tuesday on the ship Saya de Malha on a first expedition to tackle fishing aggregate devices (FADs) in the southern groups of islands of the Seychelles archipelago.

FADs are man-made floating wooden structures with hanging nets to attract fish used extensively in tuna fishing. These rafts can either be free floating or anchored to the seabed and have been known to have an adverse effect on the environment.

The Minister for Fisheries and Blue Economy, Jean-Francois Ferrari, who attended the official send-off of the crew, said that "we are on a mission to try and help mitigate the adverse impacts that FADs can have on the ocean environment."

Although ships are strictly banned from throwing trash over the last 30 years, two million FADs are dumped at sea each year and in most cases are not recovered.

Ferrari said that "these FADs sometimes break away, get lost, drift and end up on the beaches and many of our southernmost islands are affected."

In an attempt to tackle the problem, the ministry is working with the SGC, the Seychelles Islands Foundation and Island Conservation Society in clean-up expeditions to physically collect and remove such debris washed up in reefs, lagoons and on the shores of the islands.

The government is also working with those involved in the tuna industry to control the problem.

"They are contributing quite a sum of money of about €175,000 per year which we then use to finance the coast guards to go down there and recuperate FADs that are drifting and some of the FADs are already on the beaches on some of these Southern islands," he said.

In addition to the SCG officers on Saya de Malha, two students from the Maritime Training Academy – Sandro Souffe and Sandrine Thelermont – are also on board to take part in the expedition.

"We are hoping that over the next expeditions we get many more students who join and who are part of this fantastic action in favour of our environment," said Ferrari.

The ship station commander at the SCG, Ivel Ernesta, explained that Saya de Malha will be out at sea for 10 days heading to the Amirantes Islands and spending at least one day at each of the islands.

Ernesta explained that there have been reports of FADs being found on many of the islands although at the moment it is unclear how many there are, and where they are found the most.

"We expect to cover the whole country, but we are starting at the Amirantes Group of islands first and later on we will go to the Assumption Group and the Aldabra islands, which are further down south," he added.

It is hoped that after this trip, in which officers will be documenting their work, the SCG will have a clearer idea of the situation.

"The vessel will get as close as it can to the island, smaller boats will then be deployed to the islands so that the officers can begin their work," said Ernesta.