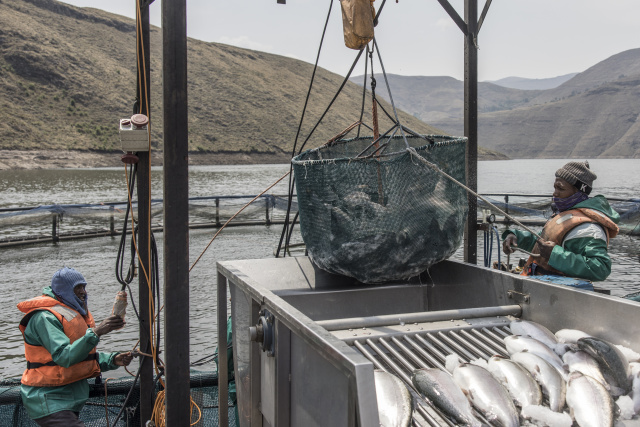 Fish farm workers lower a bucket filled with freshly harvested rainbow trouts into a tank, where the fish is chemically anaesthetised prior to being culled, at the Katse Fish Farms in Lejone, on October 11, 2022. Trout farming in Lesotho has grown on the back of another of the mountain country's most famous exports: water. South Africa gets much of its water from its neighbour, which has dammed several of its waterways over the past three decades. The dams have widened riverbeds, creating inlets and basins ideal for trout farming. Katse Fish Farm on the Malibamatso River, upstream from the giant Katse Dam reservoir that supplies Pretoria and Johannesburg. (Photo by Marco LONGARI / AFP)

(AFP) - It's harvest time in Lejone, a small village nestling in mountains in southern Africa more than two thousand metres above sea level.

The yield is not grain or fruit, but rainbow trout -- the bounty from an undulating river at the foot of the peaks of Lesotho.

Fishermen haul nets bulging with trout onto a floating platform.

The fish are killed and put on ice, the first step on their journey to dinner tables in neighbouring South Africa.

The settlement is home to one of Lesotho's two professional fish farms -- pioneering ventures in the poor landlocked kingdom.

Today, he chuckles at how the trio leapt into the business with meagre knowledge about some of its unknowns, including the best feed for fattening fish quickly.

"For five years, it was totally uneconomical," Phakisi says.

He recalls how he once found a shoal of fish dead and belly-up in the water, while another time a full cargo of imported fingerlings died on a 16-hour drive from Cape Town.

Today, the company is profitable, with a yearly output of 800 tonnes of fish, which is sold at about $4 a kilogram.

It supplies a few local restaurants, where the trout is usually pan-fried in butter for a few minutes and served with a side dish of kale and potato chips or rice.

But the bulk of its production lands on the shelves of high-end supermarkets in neighbouring South Africa, where a vacuum-packed one-kilo bag can cost up to $50.

Trout farming in Lesotho has grown on the back of another of the mountain country's most famous exports: water.

South Africa gets much of its water from its neighbour, which has dammed several of its waterways over the past three decades.

The dams have widened riverbeds, creating inlets and basins that are ideal for trout farming.

But as dam construction continues the country has the potential "to become the regional leader in aquaculture," according to the Lesotho National Development Corporation.

In this country of just over two million people, who rank among the poorest in the world, few seem to be benefiting so far from the water boom.

"We are selling water to South Africa but we have no water to our homes," says Joshua Sefali, a village leader in Lejone.

Many of the village's stone houses with thatched roofs have no mains water or electricity.

Large swathes of land were flooded after dams went up.

Some people lost their homes and access to farmland, receiving only small compensation in return.

Machaka Khalala, 31, said she received about $165 when the field where she used to grow corn and spinach was submerged.

But that's often not enough to make ends meet.

A cap on her head, Khalala was among dozens of people queueing up in the cold, a bucket in hand, on a mountain roadside.

Here, Lesotho's other fish farm hands out leftovers every week -- "the heads and backbones," Khalala said.