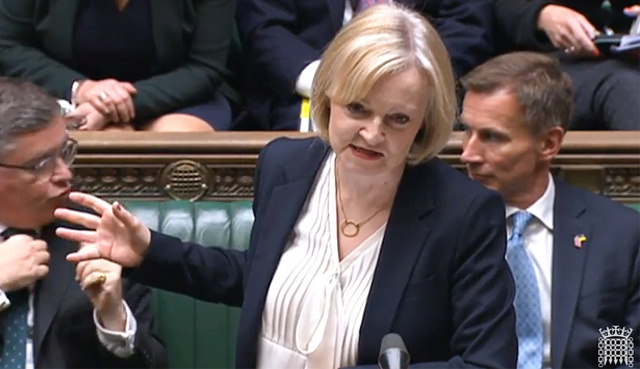 A video grab taken from footage broadcast by the UK Parliament's Parliamentary Recording Unit (PRU) shows Britain's Prime Minister Liz Truss speaking during Prime Minister's Questions in the House of Commons in London on October 19, 2022. Truss is addressing lawmakers in parliament for the first time since abandoning her disastrous tax-slashing economic policies, as she fights for her political life. (Photo by Handout / PRU / AFP)

(AFP) - British Prime Minister Liz Truss lurched deeper into chaos Wednesday as her hardline interior minister quit, forcing the new leader to turn to one of her strongest critics to shore up her tottering government.

Suella Braverman left as home secretary ostensibly after using her personal email to send an official document to a colleague -- but parted ways with a blistering attack on Truss.

Truss then appointed senior Conservative Grant Shapps in place of Braverman, having fired him as transport secretary when she succeeded Boris Johnson on September 6.

After also losing her finance minister, Kwasi Kwarteng, over a disastrous budget last month, Truss's economic agenda is in ruins and two of the biggest jobs in her cabinet are now occupied by Sunak allies.

Shapps acknowledged that Truss's government has had "a very difficult period", but that new finance minister Jeremy Hunt had done "a great job of settling the issues relating to that mini budget".

The 54-year-old Shapps is famed for his use of Excel spreadsheets -- which he reportedly put to use at the Conservatives' recent annual conference to show colleagues how Truss could be toppled.

He is seen as one of the party's most effective communicators, but courted controversy early in his political career after revelations that he had used pseudonyms in his prior business life.

The dysfunction deepened late Wednesday with angry scenes in the House of Commons, as Truss played hardball with her own party's MPs over her bid to resume fracking -- drilling onshore for gas.

Her chief whip and deputy chief whip -- charged with enforcing party discipline -- were both reported to have quit in protest at an abrupt change in government tactics over the vote, which Truss eventually won.

Downing Street was forced to issue an unusual statement to insist that the two whips "remain in post".

Long-serving Tory MP Charles Walker lashed out at colleagues who, in his view, had supported Truss in return for personal advancement.

"I hope it was worth it to sit around the cabinet table, because the damage they have done to our party is extraordinary," he told BBC television.

Business Secretary Jacob Rees-Mogg insisted the government was "functioning well" -- but the Thursday front-pages of UK newspapers were caustic.

"Broken," the right-wing Sun headlined, over a picture of Truss looking forlorn. The Guardian said: "Braverman's bombshell puts Truss on the brink."

Braverman said she had resigned over a "technical infringement" of government rules.

"I have made a mistake; I accept responsibility; I resign," she wrote in her resignation letter, while adding she had "serious concerns" that Truss was breaking manifesto promises.

Truss has faced widespread criticism for failing to step down herself, after forcing Kwarteng to take the blame for the botched budget of September 23, which sent markets into freefall.

"Pretending we haven't made mistakes, carrying on as if everyone can't see we've made them, and hoping things will magically come right is not serious politics," Braverman wrote.

Truss vowed earlier Wednesday that she would not quit as she faced booing lawmakers at her first parliamentary questions since abandoning her flagship plan for debt-fuelled tax cuts.

Opposition Labour leader Keir Starmer asked the House of Commons: "What's the point of a prime minister whose promises don't even last a week?"

Starmer mocked Truss by leading his MPs in chants of "Gone, gone!" as he read out a list of her dropped policies.

"Why is she still here?" he concluded.

Truss responded: "I am a fighter and not a quitter."

Labour MPs howled with jeers. There was silence on her own Conservative benches.

The session took place less than 48 hours after new chancellor of the exchequer Hunt dismembered Truss's tax plans in a bid to restore market confidence.

Polls show Truss's personal and party ratings have plummeted, with YouGov saying Tuesday that she had become the most unpopular leader it has ever tracked.

A separate survey of Conservative members found that less than two months after electing her as party leader and prime minister, a majority now think she should go.

Labour has opened up huge poll leads over the ruling Conservatives, amid the recent fallout as well as the worsening cost-of-living crisis.

In more bad news for the government, inflation jumped back above 10 percent on Wednesday owing to soaring food prices.

But Truss said in parliament that she would maintain the costly pensions commitment.