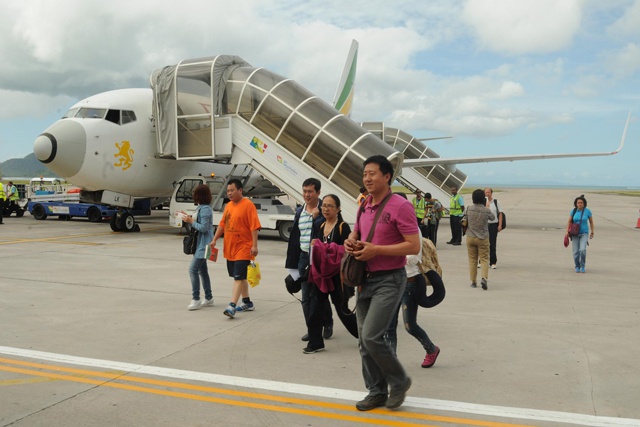 (Seychelles News Agency) - A Chinese tour operator has announced its intention to charter its own non-stop direct flights from Beijing to the Seychelles by October 2015, a move that is expected to bring an additional 25,000 Chinese tourists annually to the popular western Indian Ocean archipelago.

CAISSA Touristic, a Chinese tourism enterprise with offices in Frankfurt, Paris, Beijing, Shanghai, Guangzhou, and other major cities around the world, told the Seychelles Minister of Tourism and Culture, Alain St Ange, about their proposal to bring the non-stop chartered flights to Seychelles.

The news was announced in a press statement released this morning by the Seychelles Ministry of Tourism and Culture, which has welcomed steadily-increasing numbers of Chinese tourists after deciding to target the Asian market around three years ago.

The Minister, who is currently on an official visit to China, welcomed the news.

“The Seychelles Ministry of Tourism and Culture’s dream is to have direct non-stop flights to Seychelles from China. It is something that we dearly want to see for the continued growth of our tourism industry,” Minister St Ange said.

Currently, Chinese holiday-makers are coming to Seychelles through a variety of different routes and airlines: via Air Seychelles as well as with Etihad, Emirates, Ethiopian airlines, Kenyan Airways and the Sri Lankan national carrier, Mihin Lanka.

So far this year, 12,267 Chinese tourists have visited the Seychelles, making it the 5th largest tourist source market for the Seychelles and with an increase of 77 percent on a year-to-date basis, the country is also the fastest-growing market.

Today, the ministry says CAISSA operates one of the world’s largest non-stop chartered flight networks, positioning itself in some of the most profitable emerging tourism markets, such as Switzerland and Bali. The tour operator is currently in the process of acquiring its own wide-body Airbus A320 by 2015.

According to the tourism ministry, CAISSA told the Seychelles delegation that work still remained for Seychelles tourism roleplayers to fully understand Chinese travellers and their habits, elaborating that typical Chinese travellers tended to plan and book their holidays at the last minute, in contrast to their Western counterparts.

‘Ebola-free and safe for travellers’

With arrivals from Europe remaining depressed, Chinese tourists have never been more vital to the survival of the Seychelles economy, which, being a small island developing state, earns its main source of foreign exchange from the tourism sector.

But Chinese tourists are skittish and united by a common fear of illness – an understandable fear when considering that China is the most highly-populated nation on Earth. Hard-hit by previous SARS and avian influenza epidemics, the Chinese are painfully aware of the risks of contagious diseases.

This year, the booming Chinese outbound tourism market has been hit by a new threat: Ebola, leading to a pathological fear of the African continent and threats to boycott tourism to the continent completely if the Ebola outbreak worsens further.

According to the Minister of Tourism and Culture, a spate of Chinese bookings to the Seychelles have already been cancelled this year because the island nation is technically a part of Africa. But the minister is at pains to point out to Chinese tour operators and government officials alike that geographically, Seychelles is far removed from the Ebola outbreaks.

"Ebola is on the west coast of Africa, we sit off the east coast of Africa. Yes, Seychelles remains part of Africa, but we live our lives as a small island nation well outside all the difficulties that are ravaging this continent,” Minister St Ange said.

Emphasising that Seychelles was Ebola-free and ‘safe for travellers’, St Ange and his delegation will now move on to Xiamen and Shanghai armed with a map of Africa to illustrate their message.