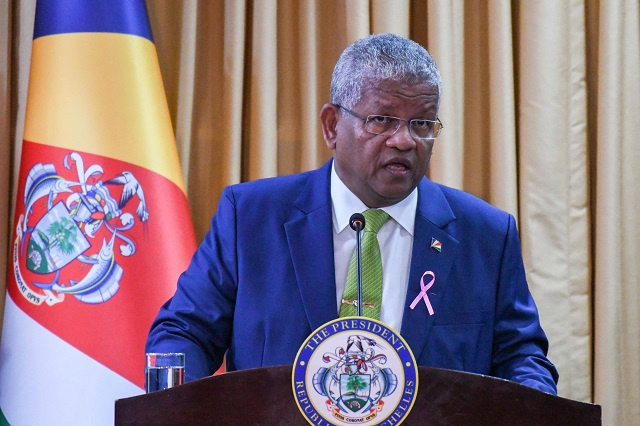 The Seychelles government will give an increase in salary next year as the government shares the benefits of wealth with the people, said President Wavel Ramkalawan in an address in the National Assembly on Thursday.

In an address to commemorate his two years in office, Ramkalawan said that Seychelles has reasons to celebrate as there is in place a government that makes decisions geared towards the welfare of the Seychellois people.

Ramkalawan was sworn in as the President of Seychelles on October 26 in 2020, after his party, Linyon Demokratik Seselwa (LDS) won a landslide victory in the presidential and legislative elections.

"Through these decisions, we have shown in a clear way that this government in office today has the people of Seychelles at heart and that the principal attention of our work is geared on how to take care of our people and how we will surmount the obstacles, face the challenges and give our people the maximum possible," said Ramkalawan.

He nevertheless recognised that some of the decisions taken had brought hardship to some people but said they were important for Seychelles to recover after the COVID-19 pandemic.

Seychelles, an archipelago in the western Indian Ocean, rolled out its COVID-19 vaccination campaign in January 2021 which allowed it to reopen its borders in March of the same year.

"Our tourism industry could bring in 182,000 visitors and this helped to lower the rate of the dollar, continue with our capital projects, bring relief to our people and allow businesses to take new momentum without getting assistance from the government," he said.

He said that "today, we have already surpassed the figure of over 250,000 visitors that we had forecast for the year and we are now forecasting that at the end of the year 2022 we would have welcomed over 300,000 visitors."

Ramkalwan said the increase in visitor arrivals is helping to bring in more revenues and this has allowed the government to be able to give a 13-month salary.

"At the beginning of November, the finance minister will give details on the budget and I would like to inform all Seychellois that the temporary relief we are giving will become permanent. Next year we will have an increase in salary and this will be more than the temporary SCR500 that we have given this year," he added.

Ramkalawan said that one of the fights he has dedicated his presidency to tackling is the fight against drugs and he congratulated the police, the Seychelles Defence Forces and everyone helping in the war against drugs.

"In this last year, we estimate that we have stopped over 200 kg from entering our country. We were able to do it through operations at sea, at the airport and in various corners of our country. These operations will continue so that we can protect our young from this scourge," said Ramkalawan.

The President thanked "everyone who has worked hard for these 24 months, the country recognises you and thank you. Seychelles is proud that you have helped created this wealth. Each one of us has a role to play in the development of our country."