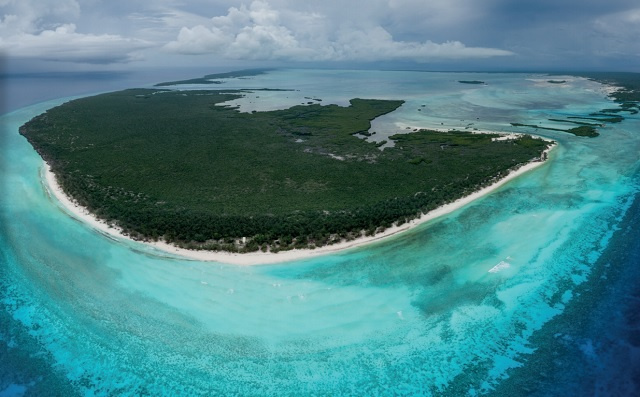 The team of over 80 scientists from Monaco, France, Seychelles, Reunion, and Mauritius will spend a week on the atoll and will carry out scientific work  (Monaco Explorations)

The Monaco Explorations' research vessel 'S.A . Agulhas 2' has reached the Seychelles waters surrounding the Aldabra Atoll, kicking off its series of research on and around this UNESCO World Heritage site.

The team of over 80 scientists from Monaco, France, Seychelles, Reunion, and Mauritius will spend a week on the atoll and will carry out scientific work on coral, mangroves, seabed, turtles, and much of the flora and fauna around and on Aldabra.

Onboard the vessel, which arrived in the Seychelles water on Thursday 20 October, is a group of between 15 and 20 Seychellois participants - including students, scientists, representatives of the Blue Economy department, and a local diver.

In a press conference on Thursday, the fisheries minister, Jean Francois Ferrari, outlined that "this is an important moment for us as we are carrying out a partnership with an institution that is really important, reputable, and well-respected in Europe."

Ferrari said that "these scientific works will surely complement what we have done ourselves in the past. Aldabra is such a rich natural lab that we will never finish exploring it. Each time we get a partner that wants to join us to do some scientific research, we are happy to partner with them."

Seychelles has signed the necessary documents to ensure that "we get the fair share of data collected and that we will receive the scientific information that is generated from the research," he added.

Hosting the exploration on Aldabra is the Seychelles Islands Foundation (SIF), which manages the two UNESCO World Heritage sites in the 115-island archipelago of the western Indian Ocean.

SIF's chief executive, Frauke Fleischer-Dogley, outlined that according to the document, data are to be provided within the next two years that follow the exploration in the waters of Seychelles.

Monaco Explorations was initiated by Prince Albert I of Monaco over 100 years ago and is now being headed by his great-great-grandson Prince Albert II of Monaco. The project was created with the aim of supporting marine governance and planning.

The Seychelles leg of the Indian Ocean Expedition focuses on collecting scientific information on still poorly known areas of the marine environment, creating an inventory of the benthic biodiversity and assessing its specificities.

By doing this, essential and sensitive habitats will be mapped, allowing for the application of specific conservation measures where needed as well as a concise policy brief for institutional stakeholders and policymakers in Seychelles.

On October 28, S.A Agulhas 2 will come into Port Victoria where it will remain until October 31. It will then set off for Saya de Malha, where further research will be carried out.

"The Saya de Malha Bank, co-managed by Seychelles and Mauritius, is a massive underwater sea mount with great seagrass meadows and, probably and hopefully, very rich fauna that we can study and why not find some resources that we can explore commercially," said Ferrari.

Exploration of the Saya de Malha Bank will take place between November 2-17.

Research » Be a reporter: Write and send your article » Subscribe for news alert
Tags: Monaco Explorations