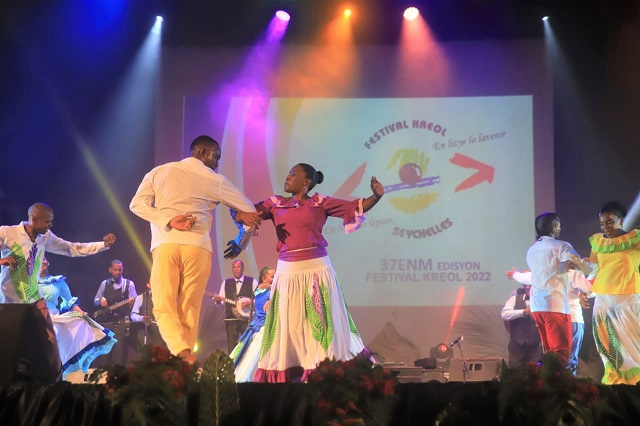 The guests at the official opening were treated to a traditional dance show. (Joe Laurence, Seychelles News Agency)

Four pioneers of Seychelles culture were awarded with trophies as a sign of appreciation for work they have done to preserve the island nation's culture at the official opening of the 37th edition of the Creole Festival on Thursday.

President Wavel Ramkalawan and the Secretary General of the Seychelles National Institute for Culture, Heritage and the Arts (SINCHA), David Andre, presented John Wirtz and Jessie Freminot with their tokens of gratitude.

Freminot, who hails from the northern Mahe district of Beau Vallon, has been in the forefront for the promotion of the Creole culture throughout her life. Wirtz, who is a local singer and musician, has contributed to Creole music for over 40 years.

The children of the other two pioneers, the late Marietta Matombe and Marcel Crea, collected their awards at the official opening ceremony held at the International Conference Centre.

The trophies were made by local artist Alain Camille.

In his address, Andre said that the festival allows Seychellois to be conscious of their heritage and what needs to be done to preserve it.

"The preservation, transmission and promotion of the culture is the responsibility of each Seychellois, regardless of our origin, our political or religious beliefs," he said.

Andre added, "that much has been accomplished and a lot of effort is being made so that our people can live and valorise our culture."

After his address, well-known Seychellois artist Joe Samy sang "Lasezon Kreol in Refleri [the Creole season has blossomed again], a song which is considered the theme song for the festival.

Meanwhile, the guests at the official opening were treated to a traditional dance show which included songs and a Moutya dance.

While the show is the same one Seychelles held at its stall at the Dubai Expo earlier this year – it was also a chance to showcase Moutya, which on December 15, 2021, was added to UNESCO's list of intangible heritage, becoming the first cultural tradition of the island nation to receive such recognition.