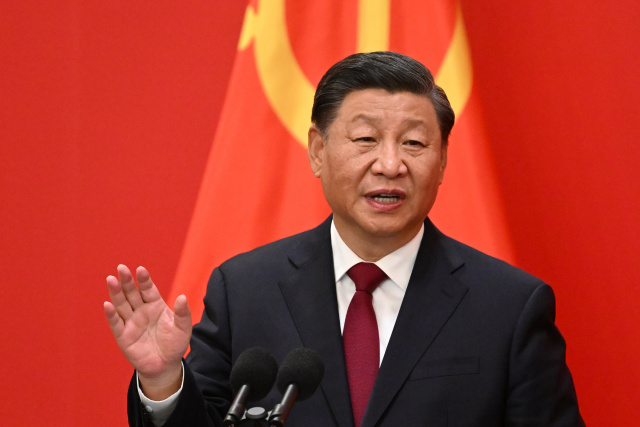 China's President Xi Jinping speaks during the introduction of members of the Chinese Communist Party's new Politburo Standing Committee, the nation's top decision-making body, to the media in the Great Hall of the People in Beijing on October 23, 2022. (Photo by Noel CELIS / AFP)

(AFP) - Xi Jinping secured a historic third term as China's leader on Sunday and filled his inner circle with close allies, achieving after a decade in power complete dominance over the ruling Communist Party.

The party's Central Committee elected Xi as its general secretary for another five-year term, bringing the country back towards one-man rule after decades of power-sharing among its elite.

"I wish to thank the whole party sincerely for the trust you have placed in us," Xi told journalists at Beijing's Great Hall of the People after the closed-door, rubber-stamp vote was announced.

Xi, 69, was also reappointed head of China's Central Military Commission, keeping him in charge of the People's Liberation Army.

He is now all but certain to sail through to a third term as the country's president, due to be formally announced during the government's annual legislative sessions in March.

Sunday's developments cement him as the most powerful leader since Communist Party founder Mao Zedong.

In a wide-ranging acceptance speech on Sunday, Xi made signature remarks celebrating China's rise as a global power and its success under his rule.

"After more than 40 years of unflagging efforts towards reform and opening up, we have created two miracles -- rapid economic development and long-term social stability."

Six of Xi's proteges and allies were also unveiled on Sunday alongside him as members of the Politburo Standing Committee -- the party's apex of power that rules the country.

Li Qiang -- a former chief of staff for Xi who oversaw a gruelling two-month Covid lockdown in Shanghai this year -- was named as number two in the Standing Committee.

This means he is likely to take over as premier from Li Keqiang, a former Xi rival who will retire next year.

Close aide Ding Xuexiang and Guangdong party chief Li Xi, a longtime confidante of the president, were among other allies named in the Standing Committee.

"The new Politburo Standing Committee confirms decisively that Xi has consolidated power at the top of the Communist Party to an extent unseen since the Mao era," said Neil Thomas, a senior China analyst at Eurasia Group.

"Xi has installed allies onto all seven seats of the Communist Party's top decision-making body, allowing him to dominate the political system for the foreseeable future."

Alfred Wu Muluan, a Chinese politics expert at the National University of Singapore, said: "It is all Xi's people, signalling he wants to rule even beyond a third term."

Xi abolished the presidential two-term limit in 2018, paving the way for him to govern indefinitely.

Xi was swiftly congratulated on Sunday by some of China's allies, including Russian President Vladimir Putin and North Korean leader Kim Jong Un. The United States offered no immediate response.

Sunday's announcements came after a week-long Congress of 2,300 hand-picked party delegates during which they endorsed Xi's "core position" in the leadership and approved a sweeping reshuffle that saw Li and other former Xi rivals relegated.

On Saturday the delegates elected the Central Committee of around 200 senior party officials, who on Sunday chose the 24-person Politburo and the Standing Committee.

The Politburo will have no women members for the first time in 25 years.

Analysts had closely watched for whether the party charter would be amended during the Congress to enshrine "Xi Jinping Thought" as a guiding philosophy, a move that would put Xi on a par with Mao.

That did not take place, though a resolution did call the creed "the Marxism of contemporary China and of the 21st Century", adding that it "embodies the best Chinese culture and ethos of this era".

In the most dramatic moment of the Congress, Hu Jintao -- Xi's predecessor as party leader and president -- was forcibly led out of Saturday's closing ceremony.

The frail-looking 79-year-old was reluctant to leave the front row, where he was sitting next to Xi.

State media reported that Hu had been removed because he was feeling unwell, and that he had since recovered.

But the extraordinary events, with Xi seemingly unfazed as Hu was lifted from his chair and escorted out, fuelled frenzied speculation among observers and analysts as to whether there were political factors at play.

Xi has promoted a narrative in his first decade of power that he has rectified huge problems that beset China and the Communist Party during the reigns of Hu and his predecessors.

These include graft within the party and unequal distribution of wealth.

Adding to the intrigue, China's censors scrubbed references to Hu from the internet after he was removed from the Congress.

One of Hu's proteges, Hu Chunhua, had been tipped by some to be named to the Standing Committee on Sunday. But Xi sidelined him.