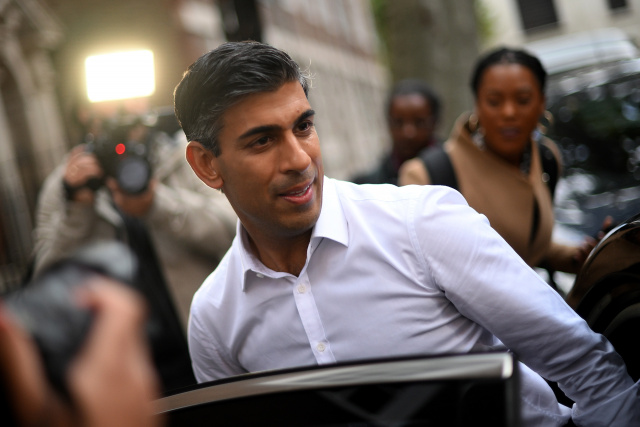 Britain's former Chancellor of the Exchequer, Conservative MP, Rishi Sunak leaves from an office in central London on October 23, 2022. British Conservative Rishi Sunak on Sunday announced he is standing to be prime minister, just weeks after failing in a first attempt and setting up a potentially bruising battle with his former boss Boris Johnson. (Photo by Daniel LEAL / AFP)

(AFP) - British Conservative Rishi Sunak was on Monday poised to become prime minister and the country's first leader of colour, after the dramatic decision by Boris Johnson to abandon an audacious political comeback.

Just weeks after failing in a first attempt to lead the ruling Tories, Sunak could cap a stunning reversal in fortunes by winning the leadership as early as Monday afternoon, following ex-premier Johnson's unexpected move late Sunday.

The contest, triggered by outgoing leader Liz Truss's resignation on Thursday, requires candidates to secure the support of at least 100 Conservative MPs by 2:00 pm (1300 GMT) on Monday.

Sunak had crossed that threshold by Friday night, ahead of declaring his candidacy on Sunday and amassing nearly 150 public nominations from Tory lawmakers.

Johnson's withdrawal from the race -- before he had even formally announced his candidacy -- left cabinet member Penny Mordaunt as the only other declared contender.

But she has struggled for momentum, attracting just two dozen public backers among her fellow MPs. Mordaunt is expected to come under growing pressure to abandon her leadership bid and end the contest quickly as Britain grapples with multiple crises.

If the 49-year-old resists and is able to garner 100 nominations, the race will be decided by the party's roughly 170,000 members in an online vote later in the week. If it came to that, the result would be announced Friday.

Just two months ago, the members selected Truss over Sunak, who had more support among MPs. Mordaunt is popular with the grassroots.

First, however, the Tories' 357 MPs would hold an "indicative" ballot -- from 3:30 pm to 5:30 pm on Monday -- to show members which candidate commands the most support within the fractious parliamentary party.

The Tories were forced into their second leadership contest since the summer due to Truss's resignation after only 44 days following the disastrous market response to her tax-slashing mini-budget.

She had replaced Johnson in early September following another government revolt over a slew of scandals, most notably the "Partygate" controversy involving Covid lockdown-breaching parties.

His attempt to make an immediate return to Downing Street appeared set to continue months of disarray and disunity within the ruling Conservatives.

Critical backbench Tory MPs warned there could be a wave of resignations under Johnson's renewed leadership, which might have led to the general election demanded by opposition parties. It is not due for at least two years.

Onetime Johnson allies, such as interior minister Grant Shapps, switched to Sunak. So too did right-wingers including Steve Baker, Kemi Badenoch and Suella Braverman.

Some, such as Baker, went out of their way to speak out against the former leader's return. He predicted a Johnson-led government would be "a guaranteed disaster".

The Brexit figurehead had cut short a Caribbean holiday to return to Britain on Saturday and had won the backing of numerous cabinet members, including Foreign Secretary James Cleverly and Business Secretary Jacob Rees-Mogg.

But in a sign of his diminished political standing, Johnson abruptly conceded late Sunday that "you can't govern effectively unless you have a united party in parliament".

While he had been "overwhelmed" by the encouragement, he reluctantly decided that "the best thing is that I do not allow my nomination to go forward", he said in Sunday's statement.

"I believe I have much to offer but I am afraid that this is simply not the right time," Johnson added, while insisting he had secured the 100 nominations needed to progress in the current contest.

Sunak was quick to pay tribute to Johnson, tweeting: "I truly hope he continues to contribute to public life at home and abroad."

The pair had held talks late into Saturday night, reports said -- thought to be their first face-to-face since a political falling out erupted in the summer.

But hopes they would somehow form a unity ticket were swiftly dashed by Sunak announcing his candidacy 12 hours later.

The ex-leader also reportedly spoke on Sunday to Mordaunt, who was said to have rebuffed his calls to back him, noting her supporters were likely to split more for Sunak.

She appears intent on remaining in the now two-person race.

"Penny is the unifying candidate who is most likely to keep the wings of the Conservative Party together," a campaign source said after Johnson's withdrawal.

"Polling shows that she is the most likely candidate to hold onto the seats the Conservative Party gained in 2019."

Polls over the weekend suggested that the Tories could benefit from a change of leader, after Truss's missteps plunged them to unprecedented lows.

But a survey by Conservative pollster James Johnson still found Mordaunt had a negative rating of -15 among the electorate, with Sunak polling at -2.