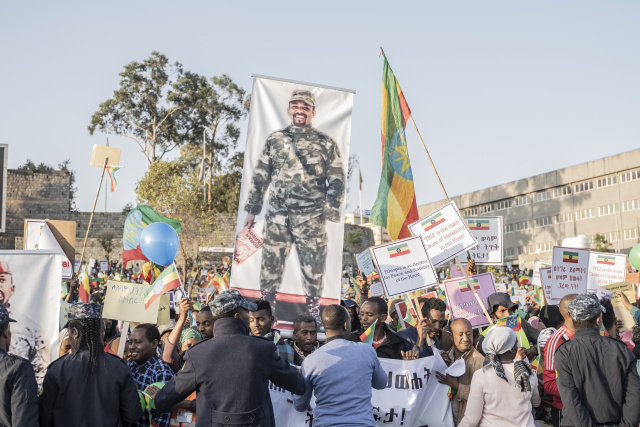 People hold a picture of Ethiopia prime minister Abiy Ahmed as they gather in Addis Ababa, Ethiopia, on October 22, 2022 during a demonstration in support of Ethiopia armed forces. Tigray's rebel authorities said Friday they would attend talks next week aimed at ending war in Ethiopia, as Prime Minister Abiy Ahmed vowed fighting "will end and peace will prevail".
The government has also said it would participate in negotiations in South Africa on Monday being organised by the African Union, as diplomatic pressure mounts for a settlement to almost two years of bloodshed. (Photo by Amanuel Sileshi / AFP)

(AFP) - The first formal peace talks between the warring sides in the brutal two-year conflict in Ethiopia's Tigray region opened in South Africa on Tuesday.

Led by the African Union (AU), the talks in Pretoria follow a fierce surge in fighting in recent weeks that has alarmed the international community and triggered fears for civilians caught in the crossfire.

They "have been convened to find a peaceful and sustainable solution to the devastating conflict," South African President Cyril Ramaphosa's spokesman Vincent Magwenya told reporters, adding that they would run until October 30.

South Africa hopes "the talks will proceed constructively and result in a successful outcome that leads to peace for all the people of our dear sister country," he said.

The dialogue between negotiators from the Ethiopian government of Prime Minister Abiy Ahmed and the regional authorities in war-stricken Tigray was launched almost two months to the day since fighting resumed, shattering a five-month truce.

The international community has been calling for an immediate ceasefire, humanitarian access to Tigray and a withdrawal of Eritrean forces, whose return to the conflict has raised fears of renewed atrocities against civilians.

He said he was "encouraged by the early demonstration of commitment to peace by the parties and to seek a lasting political solution to the conflict in the supreme interest of Ethiopia".

Faki said in a statement he "reiterates the AU's continued commitment to support the parties in an Ethiopian-owned and AU-led process to silence the guns towards a united, stable, peaceful and resilient Ethiopia."

The Ethiopian government and the rebel Tigray People's Liberation Front (TPLF) have yet to comment.

Diplomatic pressure has ratcheted up in recent weeks to end a war which has left millions in need of humanitarian aid and, according to a US estimate, as many as half a million dead.

The talks come as federal forces and their allies in the Eritrean army appear to be gaining the upper hand, seizing a string of towns in Tigray including the strategic city of Shire in offensives that have sent civilians fleeing.

It is impossible to verify developments on the battleground as Tigray -- a region of six million people -- is largely cut off by a communications blackout and access to northern Ethiopia is severely restricted.

An initial AU effort to bring the two sides to the negotiating table earlier this month failed, with diplomats suggesting logistical issues and a lack of preparedness were to blame.

The Pretoria dialogue represents the first publicly announced talks between the rivals, although a Western official has confirmed that previous secret contacts took place organised by the United States in the Seychelles and twice in Djibouti.

Abiy first sent troops into Tigray in November 2020, promising a quick victory over the northern region's dissident leaders, the TPLF, after what he said were attacks by the group on federal army camps.

The move followed long-running tensions with the TPLF, which had dominated Ethiopia's ruling coalition before Abiy came to power in 2018 and sidelined the party.

In a rare comment on the conflict last week, Abiy -- who won the 2019 Nobel Peace Prize for his rapprochement with Eritrea -- said the war "would end and peace will prevail."

But on Monday, Tigray's leader Debretsion Gebremichael issued a defiant statement saying: "The Tigray army has the capacity to defeat our enemies totally."

Amnesty International on Monday urged rival forces to protect civilians in the face of intensifying hostilities.

In a statement, the watchdog charged that air strikes on Tigray's capital Mekele and the town of Adi Daero in August and September had "killed hundreds of civilians including children."

It also claimed -- without giving sources -- that the Eritrean army had in September "extrajudicially executed" at least 40 people, including Eritrean refugees, in the northwestern Tigrayan town of Sheraro.