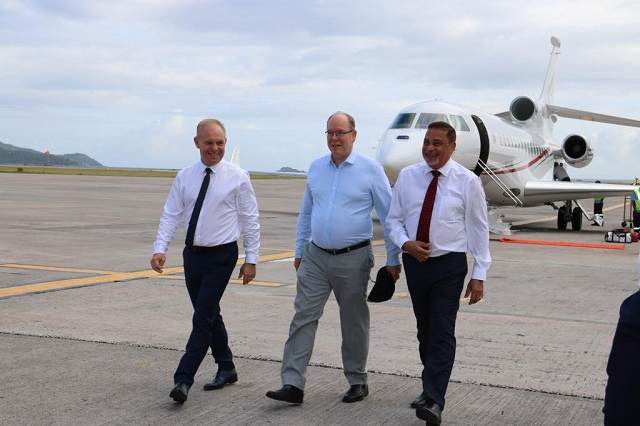 Prince Albert II (centre) and his delegation arrived in Seychelles on Monday and will depart on Wednesday, October 26. (Seychelles Nation)

(Seychelles News Agency) - Prince Albert II of Monaco has arrived in Seychelles on an official visit following an invitation from President Wavel Ramkalawan.

Prince Albert II and his delegation arrived in the island nation on Monday and will depart on Wednesday, October 26.

For the first two days of his visit, Prince  Albert II will undertake an expedition to the Aldabra Atoll, one of Seychelles' UNESCO World Heritage sites.

The expedition is part of the Monaco Exploration Mission in the Indian Ocean, organised by the Prince Albert of  Monaco Foundation and the Oceanographic Institute of Monaco. His official programme starts on Wednesday with a welcome at State House in the presence of high-ranking government officials.

The visiting head of state of Monaco will pay a courtesy call on Ramkalawan and have the opportunity to discuss fundamental elements of the expedition to Aldabra.

President Ramkalawan and the First Lady will host Prince Albert II at a reception at State House before his departure on Wednesday evening.

Meanwhile, the Monaco Explorations' research vessel 'S.A . Agulhas 2' has reached the Seychelles waters surrounding the Aldabra Atoll, kicking off its series of research on the atoll.

The team of over 80 scientists from Monaco, France, Seychelles, Reunion, and Mauritius will spend a week on the atoll and will carry out scientific work on coral, mangroves, seabed, turtles, and much of the flora and fauna around and on Aldabra. Onboard the vessel is a group of between 15 and 20 Seychellois participants - including students, scientists, representatives of the Blue Economy department, and a local diver.