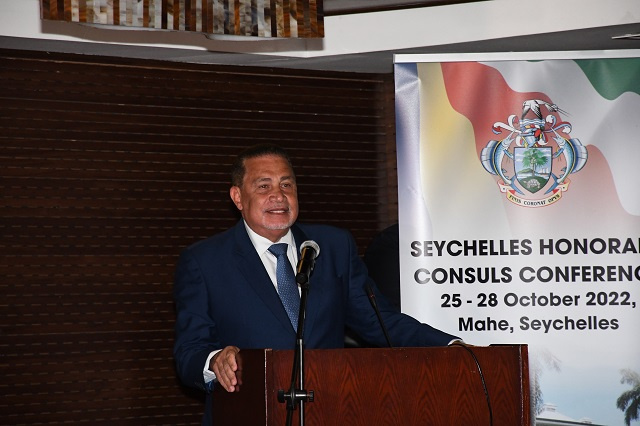 The foreign affairs minister said the conference is being organised to ensure that honorary consuls are enlightened on Seychelles' current national policies. (Seychelles Nation)

Seychelles' honorary consuls will explore opportunities to bring additional benefits in various areas of national importance and strengthen collaboration with international partners in a biennial conference that started on Wednesday.

Organised by the Foreign Affairs Department under the theme "Harnessing Opportunities through Diplomatic Relations", the conference will take place from October 26-28.

This year's consular conference will bring honorary consuls to the 26 districts of Seychelles to allow the diplomats to understand the needs of the communities and create a partnership with their adopted districts.

During his opening remark, Seychelles' foreign affairs minister, Sylvestre Radegonde, said: "It is in the spirit of further enhancing this rapport between the consuls and local communities that we have come up with the "Adopting a District" programme."

He said that since the programme was launched virtually in last year's Consuls Conference, "this year you will get the chance to visit your adopted district. This should take you closer to the community to better understand their challenges and priorities so that you are in a better position to bring your contribution and support."

Over 70 honorary consuls representing Seychelles across all five continents are present in the island nation for the conference. The 2022 conference is the first to be held in person after a hiatus of four years.

At the opening ceremony, a number of honorary consuls received a token of appreciation for serving Seychelles for 20 years or more. The first to be recognised was the Honorary Consul for Spain, Juan Gaspart. With 42 years in the post, Gaspart is the longest-serving consul of the 115-island archipelago and the Dean of Seychelles' Honorary Consuls.

"For many years I have had the opportunity to serve Seychelles, which is an exceptional country. I always do my best to help Seychellois who have a problem whenever they come to Spain and to other European countries. That is the most important for me, and not the title as the Dean," shared Gaspart.

Another long-serving consul, Maryvonne Pool who is based in Tanzania, shared with the press that she wants to push the youths forward.

"In Seychelles, the youths have not reached the level they should have. Seychelles' Consulate in Tanzania is followed by a lot of youth's organisations and they are always looking for exchange programmes that can allow the youths of both countries to learn from each other. I think it is very important for the government to look at the youths of Seychelles," she said.

Given that the island state has only nine embassies overseas, it relies heavily on the work of honorary consuls to promote its diplomatic agenda, forge new partnerships with governments and international organisations, attract investment and cater to the needs of its citizens abroad.

Diplomacy » Be a reporter: Write and send your article » Subscribe for news alert
Tags: Consuls Conference