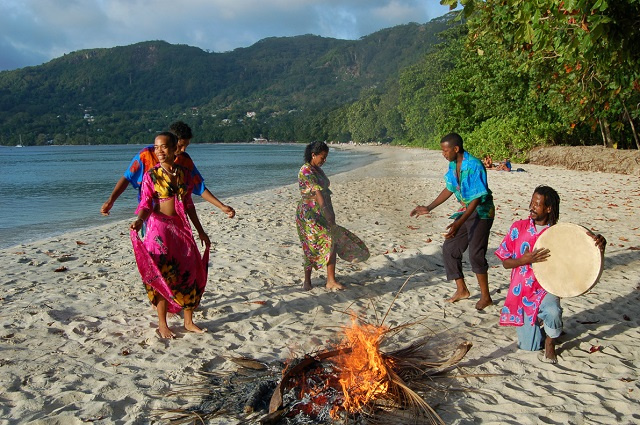 Seychelles is celebrating its 37th Creole Festival, an annual celebration of the various aspects of the country's culture. This year, the event in which the Seychellois nation celebrates its diversity, rich heritage and culture, is taking place from the beginning to the end of October.

One of the traditional dances of Seychelles is the Moutya, which is now on UNESCO's list of intangible heritage, and it continues to be an expression of cultural identity.

SNA brings you six reasons why Moutya has a special place in Seychellois culture.

The Moutya dance was brought to the Seychelles islands by the enslaved Africans who arrived with the French settlers in the early 18th century.

The slaves used to practice this dance at night in the forest, at a distance from the plantation house where their masters lived.

An expression of suffering and difficulties faced

According to Seychellois historian Tony Mathiot, "Dancing the 'Moutya' was the very few forms of entertainment for the slaves at night. This was practiced more on the other islands of the archipelago and not Mahe, as the British had imposed restrictions under the law on the main island."

It is a somewhat slow dance performed to the beat of a heated goatskin drum originally around a bonfire, deep in the forest in the dead of night.

The dance was an expression of resistance, allowing enslaved people to share their suffering and sing about the difficulties they faced, far from their masters' ears.

Ban on the tapping of Moutya drums on Mahe, Praslin and La Digue after 9 p.m. repealed

On August 30, 2018, Regulation 115 of 1935 (Drums) which banned the tapping of drums in Victoria and other locations on Mahe, Praslin and La Digue after 9 p.m. was repealed after the then President Danny Faure signed the Statutory Instrument to repeal the regulation.

On December 15, 2021, the Moutya dance was added to UNESCO's list of intangible heritage, becoming the first cultural tradition of the island nation to receive such recognition.

The recognition came after the third attempt to get the dance recognised. Seychelles started the process for its first nomination dossier for the possible inscription of the Moutya on the UNESCO's list in September 2015.

David Andre, the secretary general for the Seychelles National Institute for Culture, Heritage and the Arts, said that this "shows how the entire world, through the UNESCO (United Nations Educational, Scientific and Cultural Organisation), is valorising this piece of Seychelles heritage which at one time we were not paying much attention to."

Today, the Moutya is being played with more modern instruments and no fire is needed but the songs still evoke the chant of the slavery days and it is better danced in the open air.

The lyrics of today's Moutya are also different from those of the past.

David Andre has called on musicians to use the Moutya as a source of inspiration to create new music, to develop and enrich the dance and bring added value to it while at the same time preserving its authenticity.

Since 2018, there have been renewed efforts to create interest in the island nation's dying traditional Creole music, including the Moutya.

Seychelles' Cultural Ambassador, Patrick Victor, a well-known Seychellois artist who started giving lessons in 2018, said "I work with those kids because they have a purity of mind; they don't believe this is the music of slaves. Moutya is a sacred music."

In June 2022, a group called SMS made up of well-known local artists Clive Camille, Joseph Sinon and Elijah released an album called "Moutya de Seychelles" with the aim to keep the Moutya alive.