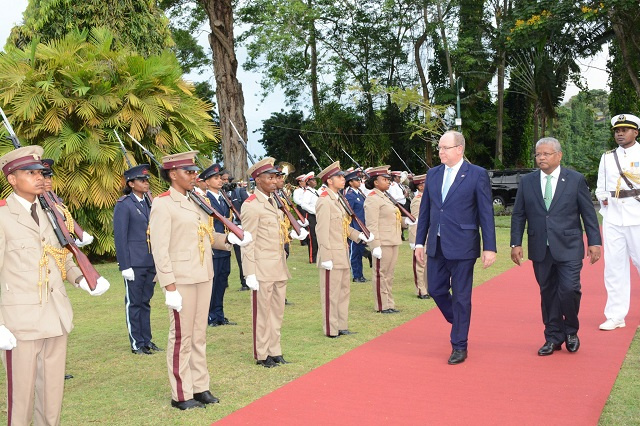 Prince Albert II of Monaco arrived in Seychelles on an official visit at the invitation of President Ramkalawan. (State House)

A continued partnership between Seychelles and Monaco in environment protection was the subject of discussion between President Wavel Ramkalawan and Prince Albert II of Monaco on Wednesday.

The two heads of state held talks prior to a reception held in the State House gardens and Ramkalawan said that "for us, it is indeed an honour to welcome a champion of protecting the environment."

"The exploration that your foundation is leading is one that will definitely do a lot of good to both the research that is being led by Monaco, but also for us in Seychelles," said the President.

Prince Albert said that work has begun with the Oceanographic Institute of Monaco to re-establish coral reefs "to try to find the most resilient species that will be able to help in the fight against climate change, and the many consequences of that on marine life."

The two leaders also discussed fundamental elements of the expedition to Aldabra, which is part of the Monaco Exploration Mission in the Indian Ocean, organised by the Prince Albert of Monaco Foundation and the Oceanographic Institute of Monaco.

"There are so many exciting things about what will happen," said President Ramkalawan, which he said will also include "more resilient ways to fight [coral] bleaching and a way to re-establish all the reefs."

He added that "managing this partnership will only do one thing, both Monaco and Seychelles will be participating in protecting our planet."

Another project discussed was the elimination of rats and cats on Aldabra – as the two have an adverse effect on the atoll's natural habitats.

Furthermore, the two countries have certain partnerships in the area of education.

"We are now talking about youth exchanges to get our young people to bond, so the youth of Monaco and of Seychelles get to know each other better," said Ramkalawan.

Prince Albert, who left the country after the reception held in his honour, said "what an incredible visit we had." He had the opportunity to visit the Aldabra Atoll during his short stay.

Ramkalawan has extended a further invitation to Prince Albert II to come back to Seychelles and asked those present to give him a piece of breadfruit so as to ensure his return to the country.

In Seychelles, an archipelago in the Indian Ocean, it is believed that visitors who eat breadfruit while visiting the islands, will most surely come back.

General » Be a reporter: Write and send your article » Subscribe for news alert
Tags: Oceanographic Institute of Monaco