Who is the most beautiful of them all? Seychelles islands contestant gets ready for Miss World 2014 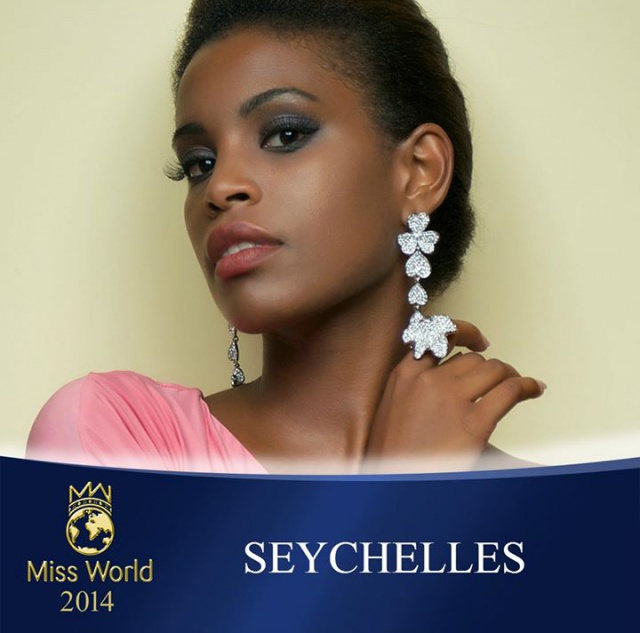 (Seychelles News Agency) - With one month left to the finals of the Miss World beauty pageant which brings together the most beautiful women from all corners of the world, Seychelles’ very own beauty queen, Camila Estico is rallying support to win the most prestigious crown.

On the Miss World beauty pageant‘s Facebook page, Camila’s introduction video has sparked much interest from social media users with many describing it as “different” and “original”.

Speaking to SNA, the brown-skinned beauty with big eyes and a perfect smile, confesses that the video “does not talk about me but about my country.”

Filmed by a South African TV crew, the montage brings together different sceneries of the Seychelles including historical sights, streets and beaches, with Camila appearing in a bright red dress in almost all of the scenes.

Camila says the contestant introduction video will “emphasize on the social ills that are happening in the country, on our children, on women on everything, and bring it on a world stage.”

“When I am judged at the competition, it will not be only about me, but about the people and country I am representing”, says Camila, who is also urging the Seychellois people to rally behind her and vote for her on the website, give their criticism and comments. The video can also be downloaded.

“I would love to have my country behind me in the competition”, says Camila.

After months of preparation with grooming, makeup, choreography classes and photo shoot events in countries such as Italy, the twenty-three year old business studies student says she is ready for the big day, stating that the “hardest part of the competition will be those three weeks prior to the pageant”.

This year’s Miss World pageant will be held in London on December 14, where the world’s beauty queens will parade in various dresses made to capture their best assets. Camila is most enthusiastic about her evening dress. “It’s an amazing dress; I am very pleased with it and let’s hope it shines on stage.”

Part of the world’s competition is the 'beauty with a purpose project' which Camila initiated as soon as she grabbed the local beauty crown early in June.

“I’ve strived not to be just a beauty queen but to have beauty with a purpose, actually have a project and actually give back something to the community as Miss Seychelles Another World 2014”.

Her project “Back to basics”, which is aimed at encouraging people to eat healthier food, is targeting three local families for a period of eight weeks. The highlights of the project will be presented at the world stage and Camila feels that it will help her win the prestigious crown of Miss World 2014.

“I think it is a strong project because as you know obesity is not only an epidemic in the Seychelles but it is an epidemic worldwide and I think as a small population, Seychelles has all the potential of becoming a healthier nation if we all come together”.

According to the World’s Health Organisation figures for 2013, an estimated 60.1 percent of the Seychelles population is considered as obese and the country is ranked 18th in the world, with the highest number of people who are overweight.

Ready to conquer the World

The world beauty pageant comes almost half way through her reign as Miss Seychelles…Another World 2014, which she described as “challenging, yet memorable”.

“It is a learning period of my life”, stated Camila to SNA.

Recently, Camila also attended the World Travel Market in London which she represented Seychelles with a high-level delegation from the Seychelles Tourism Board and the Ministry of Tourism and Culture. Exposed to so much glamour and attention, the down-to-earth Camila says she is determined to remain who she is.

“What makes me strong and will make me get through my reign is that I strive to stay true to myself”, stated Estico. “As much as I’m going through all these changes and all these challenges, I will make sure that I know who I am and what I want to do. And most importantly I feel like this crown and this title is not for me but more for the country as a whole”.

“A beauty queen, it’s a job, it is not just a pretty face, I think most people see a beauty face but the person is way more than they can imagine”, says Camila.

This year’s finalists in London which will be chosen out of 129 girls, and will take the crown from Megan Young of the Philippines, who won the crown in 2013.

Could the avid art lover and well-travelled student be Seychelles’ closest chance to winning the Miss World crown?