Climate plans would allow up to 2.6C of global warming: UN 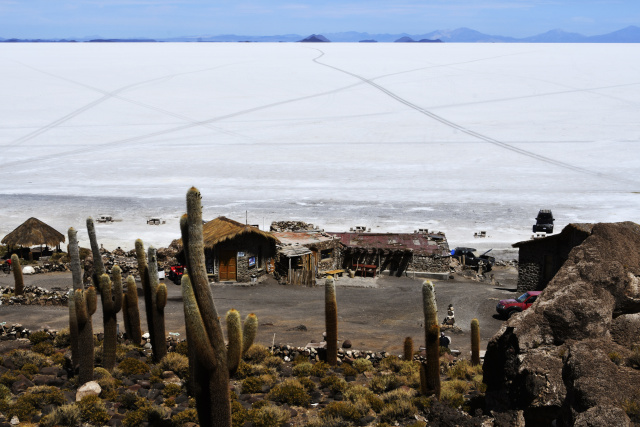 A small village is seen at the Uyuni salt flat in Uyuni, Bolivia, on October 16, 2022. The turquoise glimmer of open-air pools meets the dazzling white of a seemingly endless salt desert where hope and disillusionment collide in Latin America's "lithium triangle." A key component of batteries used in electric cars, demand has exploded for the "white gold" found in Argentina, Bolivia and Chile in quantities larger than anywhere else in the world. (Photo by Aizar RALDES / AFP)

(AFP) - Country climate pledges leave the world on track to heat by as much as 2.6 degrees Celsius this century, the United Nations said on Wednesday, warning that emissions must fall 45 percent this decade to limit disastrous global warming.

The United Nations Environment Programme, in its annual Emissions Gap report, found that updated national promises since last year's COP26 summit in Glasgow would only shave less than one percent off global greenhouse gas emissions by 2030.

The world has warmed nearly 1.2C since the start of the Industrial Revolution and already faces increasingly ferocious climate-enhanced weather extremes like heatwaves, storms and floods.

The Emissions Gap report examines the difference between the planet-heating pollution that will still be released under countries' decarbonisation plans and what science says is needed to keep to the Paris Agreement goal of limiting warming to between 1.5-2.0C.

A day after the UN's climate change agency said governments were still doing "nowhere near" enough to keep global heating to 1.5C, UNEP found progress on emissions cutting had been "woefully inadequate".

It said that additional pledges made since the COP26 summit in Glasgow last year would not even cut emissions by one percent by 2030.

Failure left the world "hurtling towards" a temperature rise far in excess of the Paris goals, it added.

"It's another year squandered in terms of actually doing something about the problem," the report's lead author, Anne Olhoff, told AFP.

"That's not to say that all nations have not taken this seriously. But from a global perspective, it's definitely very far from adequate."

The report found that in order for temperature rises to be capped at 2C, emissions would need to fall 30 percent faster by 2030 than envisioned under countries' most up-to-date plans.

Under the 2015 Paris deal, countries are required to submit ever deeper emission cutting plans, known as Nationally Determined Contributions, or NDCs.

UNEP found that "unconditional" NDCs -- which countries plan regardless of external support -- would probably lead to Earth's average temperature rising by 2.6C by 2100. Scientists warn that level would be catastrophic for humanity and for nature.

Conditional NDCs -- which rely on international funding to achieve -- would probably lead to a 2.4C temperature rise this century, it said.

All told, current plans are likely to see a five- to 10-percent reduction in emissions by 2030 -- a far cry from the drop of nearly 50 percent required for 1.5C.

UNEP said that in 2020, carbon pollution fell more than seven percent, largely thanks to Covid-19 lockdowns and travel restrictions. A fall of that magnitude is needed every year this decade to stay on track for 1.5C.

But it said greenhouse gas emissions in 2021 could end up being the highest on record -- some 52.8 billion tonnes -- because countries threw themselves into fossil-fuelled pandemic recoveries.

"We see a full bounce-back in emissions after Covid," said Olhoff.

"It's a missed opportunity in terms of utilising these unprecedented recovery funds to accelerate a green transition."

Separately, the International Energy Agency said on Thursday it believed global energy emissions would peak in 2025 as surging oil and gas prices spurred a drive to renewables.

But UNEP said that while the switch to greener tech in the power sector was accelerating, several industries were lagging behind in the push towards net-zero emissions.

For example, in the food sector, which is responsible for around a third of emissions, dietary changes and cutting food loss could help reduce the sector's footprint by more than 30 percent by 2050.

- 'Avoid as much damage as possible' -

Olhoff said the financial sector was "part of the problem rather than part of the solution" to climate change, with hundreds of billions funnelled annually to fossil fuel projects.

UNEP suggested the introduction of an effective carbon price under a global cap and trade system that would push investors to consider the environmental impact of their portfolios.

"Commitments to net zero are worth zero without the plans, policies and actions to back it up," he said in a video message.

Last year the Intergovernmental Panel on Climate Change said that the world was likely to reach and even exceed 1.5C within decades, no matter how quickly emissions fall in the short term.

Olhoff said that for every year that passed without significant emissions cuts, 1.5C was getting "less realistic and less feasible".

But she insisted that governments needed to accelerate the green transition to avoid as much damage as possible.

"The more we learn, it's absolutely clear that we should aim to get (temperature rises) as low as possible," Olhoff said.