Brazil on edge as polarizing runoff goes down to wire 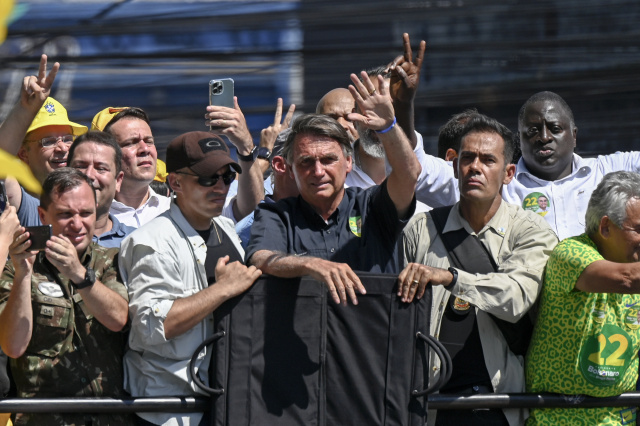 The sprawling South American giant of 215 million people has been bracing for this moment for 18 months, since the Supreme Court annulled the controversial corruption convictions that sent Lula to jail -- a decision that cleared the way for the once wildly popular former president (2003-2010) to make a political comeback.

It has been the charismatic-but-tarnished ex-metalworker's race to lose ever since. And, though Lula remains the front-runner with two tense days to go, pundits say it is entirely possible he could do just that.

Bolsonaro, the vitriolic hardline conservative dubbed the "Tropical Trump," trails by a score of 47 percent to 53 percent, according to a poll published Thursday by the Datafolha institute -- down from a 21-point lead for Lula in May.

Lula, who turned 77 Thursday, and Bolsonaro, 67, will go head-to-head in a final debate Friday night, likely to be a brutal last-ditch brawl.

"This race is going to go down to the wire," said Brian Winter, editor-in-chief of Americas Quarterly.

"Every last vote is going to count. I wouldn't bet a lot of money on the outcome."

Seeking a new four-year term, Bolsonaro defied pollsters' predictions of a double-digit defeat in the first-round election on October 2 to finish just five points shy of Lula, 48 percent to 43 percent.

His allies meanwhile scored big victories in Congressional and governors' races, cementing the far-right's status as a major force in Brazilian politics, regardless of who wins Sunday.

Bolsonaro emerged from the first round looking confident in a come-from-behind win.

But he has seemed less sure in recent days, renewing his attacks on the electoral system -- which he alleges is plagued by fraud -- and saying he will accept defeat only if there is "nothing abnormal."

Many fear a Brazilian remake of the Capitol riots that rocked the United States after the 2020 election loss of Bolsonaro's political role model, Donald Trump.

Bolsonaro's campaign has already alleged "electoral fraud" before the vote, claiming 150,000 of Bolsonaro's publicly funded campaign ad spots were blocked from the radio.

Analysts say Bolsonaro lacks the military, business and institutional support he would need to pull off a power grab if he loses.

But he may well try.

And "as we saw in the US... that leaves a permanent scar on a country," Winter said.

Bolsonaro's side accuses Lula of plotting to close churches, promoting "gender ideology" in schools, and making a pact with Satan.

Lula's side has accused Bolsonaro of pedophilia and cannibalism.

The muck has left little space for actual issues, such as the weak economy, rampant destruction of the Amazon rainforest and the 33 million Brazilians living in hunger.

Making his sixth bid for president, Lula is running largely on the legacy of a watershed economic boom in the 2000s -- but has offered few new ideas or concrete plans for Latin America's biggest economy.

And though the corruption charges that landed him in jail for 18 months were annulled, he remains tainted by the fallout of a massive corruption scandal at state-run oil company Petrobras.

For fans, the good memories are all that matter.

"We were for Lula then, we're for Lula now," 25-year-old ranch hand Ana Gabriele dos Santos, whose family has long voted for the veteran leftist, told AFP in the harsh, semi-arid Sertao region in Brazil's impoverished northeast, a huge bastion of Lula support.

Bolsonaro, whose popularity was pummeled by the carnage of Covid-19 and his denialist response, is meanwhile running on a slowly improving economy, a welfare spending splurge and conservatives' fervent support for his culture wars.

Backers love his focus on "God, country, family and freedom."

"He's just like us," said businessman Gilberto Klais, proudly sporting a giant Bolsonaro car decal in the green-and-yellow of the Brazilian flag in the southern state of Parana, a Bolsonaro bastion.

Many Brazilians, however, will be voting for the candidate they hate less.