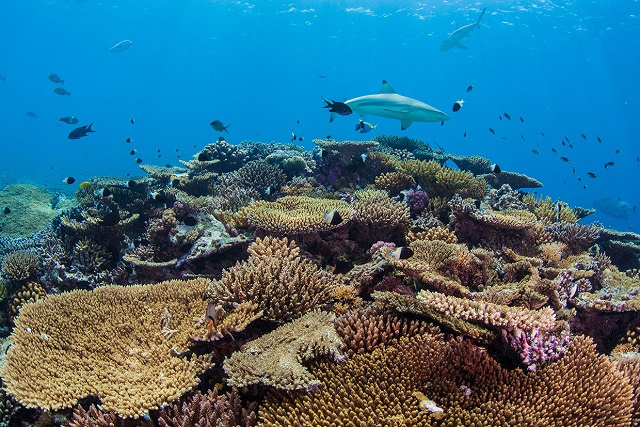 The participants will also discuss the various approaches to implement the existing shark and ray listing, which is in preparation for the 19th Conference of the Parties, (Save our Seas Foundation)

(Seychelles News Agency) - Officials from fisheries, biosecurity, conservation and customs from Western Indian Ocean states are meeting in Seychelles for two days to review the proposed species for Appendix II of the Convention on International Trade in Endangered Species of Wild Fauna and Flora (CITES).

The two-day workshop, in which participants will also discuss the various approaches to implement the existing shark and ray listing, is in preparation for the 19th Conference of the Parties (CoP19) taking place November 14-25 in Panama.

In his opening address, the environment minister, Flavien Joubert, said that "sharks and rays are among the most threatened species on our planet and in recent years there has been increased momentum to push their conservation forward. As apex predators, they have an important role to play in the functioning of ecosystems and are key to balancing the food chain. The loss of sharks and rays in our oceans can lead to unpredictable consequences, including the possible collapse of important fisheries."

At the meeting, the participants will also have the opportunity to present success stories as well as express needs and concerns pertaining to existing and proposed CITES species. They will also discuss the utility of international, regional and domestic shark management strategies with a special focus on the technical aspects of implementation.

Aside from the theories, there will also be a combination of practical demonstrations and expert presentations for improved customs and trade regulation. The focus will be on shark fin identification for current and proposed CITES Appendix II species and new tools for improved tracking of traded protected marine and terrestrial species.

Seychelles became a party to CITES, a global agreement among governments to regulate or ban international trade in species under threat, in 1977. It has since then joined other parties' efforts to ensure that the trade in listed species is biologically sustainable and not detrimental to their survival. In doing so, the island nation continues to be a leader in promoting the global conservation and management of biodiversity.

Joubert said that his ministry works closely with the fisheries ministry and other partners to ensure that Seychelles fulfills its requirements to implement the CITES Appendix listings of sharks and rays.

"A number of precautionary measures, projects and programmes are being implemented in order to enable greater conservation and sustainable management of these species. In 2007, Seychelles developed its first National Plan of Action for the Conservation and Management of Sharks to address the concerns related to the shark fishery in Seychelles," he added.

The minister highlighted that Seychelles as a small island state "is aware of the implementation challenges of CITES, including lack of financial and human resources, lack of capacity nationally to develop non-detriment findings, challenges with species identification and so on. Nevertheless, we remain committed towards the objectives of the Convention."

The workshop, which is the first in three series, will conclude on Friday. The next one will be held for non-governmental organisations and other local partners involved in shark conservation and management.