More than 150 killed in Halloween stampede in Seoul 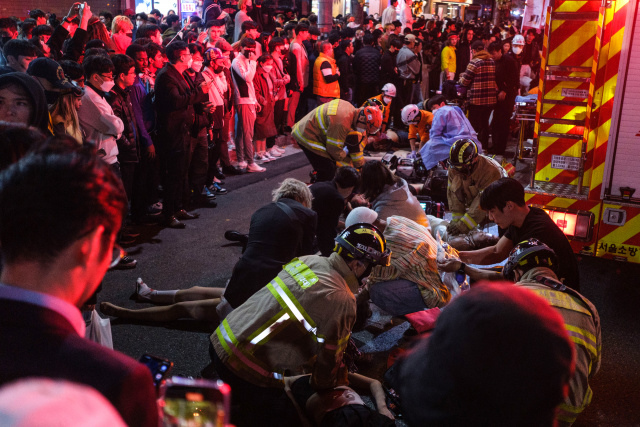 This picture taken on October 29, 2022 shows onlookers watching as emergency workers tend to people who were in a Halloween stampede in the district of Itaewon in Seoul. More than 150 people have been killed in a stampede at a Halloween event in Seoul, officials said on October 30, with South Korea's president vowing a thorough investigation into one of the country's worst-ever disasters. (Photo by Albert RETIEF / AFP)

(AFP) - More than 150 people have been killed in a stampede at a Halloween event in Seoul, officials said Sunday, with South Korea's president vowing a thorough investigation into one of the country's worst-ever disasters.

The crowd surge and crush took place in the capital's popular central Itaewon district, where estimates suggest as many as 100,000 people -- mostly in their teens and 20s -- went to celebrate Halloween Saturday night, clogging the area's narrow alleyways and winding streets.

President Yoon Suk-yeol declared a period of national mourning Sunday, telling the country in a televised address that "a tragedy and disaster occurred that should not have happened".

He said the government "will thoroughly investigate the cause of the incident and make fundamental improvements to ensure the same accident does not occur again".

Witnesses described being trapped in a narrow, sloping alleyway, and scrambling to get out of the suffocating crowd as people piled on top of one another.

"There were so many people just being pushed around and I got caught in the crowd and I couldn't get out at first," 30-year-old Jeon Ga-eul told AFP.

The interior ministry said 153 people had died, including 20 foreigners, in the stampede, which occurred around 10 pm local time (1300 GMT).

Most of the victims were young women in their 20s, it said, adding that 133 people were injured.

An official from the defence ministry said three military personnel were among the dead.

Authorities also said they had received more than 2,600 reports of people missing.

Seoul mayor Oh Se-hoon, who rushed back to South Korea from a work trip in Europe, said his office would set up a memorial altar so the public could pay their respects to the victims, starting Monday morning.

"Most of the casualties are young people like our sons and daughters, which makes it even more sad," Oh said while visiting the site of the disaster.

Officials said Sunday they had no clear idea of what caused the crush, while witnesses described scenes of chaos after a vast crowd panicked in the narrow alleyway.

Local shopkeepers told AFP the number of people at the annual celebration was "unprecedentedly large" this year -- the first public event to be held without Covid-19 restrictions since the pandemic began.

As questions began to emerge over a lack of security at the event, interior minister Lee Sang-min told a briefing that the police force had been preoccupied on the other side of town.

"A considerable number had been deployed at Gwanghwamun where a large crowd was expected for a protest," he said.

Police had also not expected such a large crowd at the Halloween event, he added.

Paramedics at the scene, quickly overwhelmed by the number of victims, were asking passers-by to administer first aid.

In an interview with local broadcaster YTN, Lee Beom-suk, a doctor at the event, described the chaos.

"So many victims' faces were pale. I could not catch their pulse or breathing and many of them had a bloody nose. When I tried CPR, I also drew blood out of their mouths."

Photos captured by AFP showed scores of bodies on the pavement covered by bed sheets, and emergency workers loading more bodies on stretchers into ambulances.

Twitter user @janelles_story shared a video that she said showed Itaewon shortly before the stampede in which hundreds of young people, many in elaborate Halloween costumes, are seen in a narrow street lined with bars and cafes.

The crowd appears in good spirits at first, but then a commotion begins and people start being pushed into one another. Screams and gasps are heard and a female voice cries out in English "Shit, shit!" followed by "Oh my God, oh my God!"

The United States embassy in Seoul confirmed that two US nationals had died. Russia said three of its citizens were killed.

China also confirmed that four of its nationals had died, with President Xi Jinping sending "deep condolences" to Seoul.