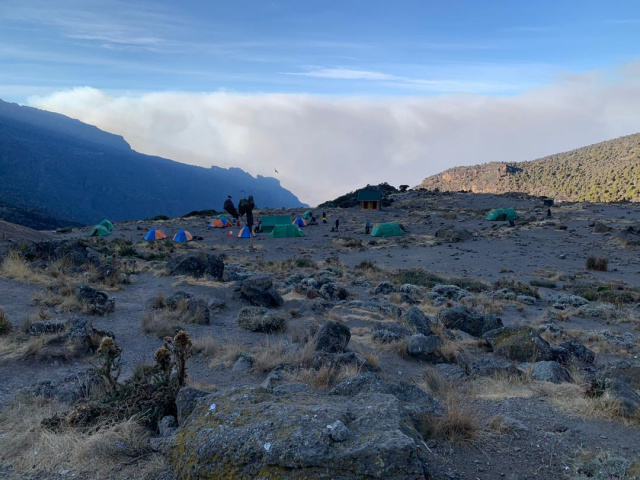 15 October 2020, Tanzania, Kilimandscharo: A group of German, Swiss and Austrian mountaineers have set up their camp on Kilimanjaro at an altitude of about 4000 metres. (Debbie Bachmann/-/dpa / Picture-Alliance via AFP)

(AFP) - Tanzania on Tuesday mobilised soldiers to reinforce civilian firefighters and volunteers stretched thin by a wildfire on Africa's highest peak, Mount Kilimanjaro, which has been blazing for more than 10 days.

The fire started on October 21 near the Karanga site used by climbers ascending the famous peak, at about 4,000 metres (13,000 feet) altitude on its south side.

It has since lit up in other pockets and overwhelmed a team of nearly 600 people, including students using twigs and branches to put out the fire.

"The officers have already arrived at the mountain and are ready to put out the fire," Tanzania People's Defence Forces (TPDF) said in a statement, without giving numbers.

The government last week thought the fire was under control before high winds spread it to three other places.

"We will cooperate with the other forces and volunteers to make sure that the fire is quickly put under control before it causes serious damage," the TPDF said.

So far, no injuries or deaths have been reported and tourism has not been affected, according to the government.

Two to four square kilometres (0.7 to 1.5 square miles) of bushland had been consumed by the fire, the natural resources and tourism ministry said last week.

Mount Kilimanjaro, with its snow-capped peak, is famed around the world. Situated in the northeast of the country, it is the highest free-standing mountain in the world at 5,895 metres (19,340 feet).

The forests surrounding it form part of a national park, and Kilimanjaro National Park is listed as a UNESCO World Heritage site, in part because many endangered species live there.

Officials have not yet established how the fire started, but it comes exactly two years after another blaze, which raged for a week in October 2020 across 95 square kilometres (37 square miles).