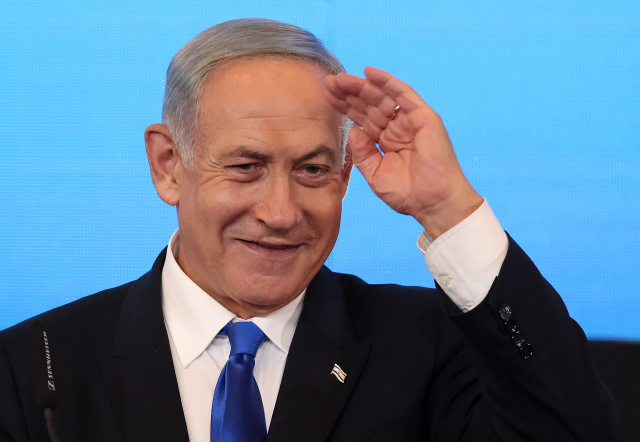 Israel's ex-premier and leader of the Likud party Benjamin Netanyahu addresses supporters at campaign headquarters in Jerusalem early on November 2, 2022, after the end of voting for national elections. Netanyahu inched towards reclaiming power after projected election results showed a majority government was within reach for the veteran right-winger, but the outlook could shift as ballots are counted. (Photo by RONALDO SCHEMIDT / AFP)

(AFP) - Israel's right-wing veteran Benjamin Netanyahu, who has served as the country's prime minister longer than anyone else, has described protecting the Jewish state from its enemies as his "life's mission".

His critics and allies alike concede that the gravel-voiced security hawk is a tireless campaigner in pursuit of an office -- the Israeli premiership -- which he believes he is uniquely qualified to hold.

At age 73, the leader of the conservative Likud party may be on course for a comeback after initial projection Tuesday in Israel's fifth election in less than four years indicated the bloc of parties backing him may be headed for a parliamentary majority.

Despite his trial on corruption charges, which he denies, Bibi, as he is known, has the loyal support of the Likud grassroots that propelled his potential return to power.

Netanyahu "will try to do whatever he can to form a coalition, no matter how crazy", Netanyahu's former spokesman and Likud insider Aviv Bushinsky told AFP before the vote.

"In his head he has a mission from God to save the country."

Netanyahu is the son of a historian who was active in right-wing Zionist groups, an ideological inheritance that helped shape his political career.

He was marked strongly by the death of his older brother Yonatan, the only Israeli soldier killed in a 1976 commando raid to free hostages at Uganda's Entebbe airport.

In a memoir released last month, Netanyahu recalled that he felt he would "never recover" from the loss. "When the news reached me that Yoni had died in Entebbe, I felt as if my life had ended."

Netanyahu has never engaged in substantive peace talks with the Palestinians, rather overseeing a boom in expansion of Israel's West Bank settlements, which are considered illegal under international law.

Countering Israel's arch-foe Iran -- including its alleged nuclear weapons programme and allied groups like Lebanon's Hezbollah -- has been the centrepiece of his foreign policy.

Netanyahu has two sons with his wife Sara and a daughter from a previous marriage.

Raised partly in the United States, Netanyahu graduated from the prestigious Massachusetts Institute of Technology.

With his fluent English, he regularly appeared on US television, defending Israel throughout the late 1980s and early 1990s -- exposure that raised his profile both at home and abroad.

Netanyahu became Likud's leader in 1993 and led the party to victory as Israel's youngest-ever prime minister in 1996, aged 46.

Despite his advancing age, ongoing trial and past electoral misadventures, there is little doubt about Netanyahu's thirst to reclaim power.

He reflected on his achievements in the autobiography he wrote after being ousted from office by an unlikely alliance of rivals in June 2021.

"As a soldier, I fought to defend Israel on battlefields," wrote Netanyahu, who served in the Israeli army's elite commando unit Sayeret Matkal.

"As a diplomat, I fended off attacks against its legitimacy in world forums, as finance minister and prime minister I sought to multiply its economic and political power among the nations," he went on, concluding that he had "helped secure the future of my ancient people".

Netayahu's Likud and its allies failed to win a majority in four previous votes and, for the first time since 2009, Netanyahu did not run as the incumbent in Tuesday's election.

On the campaign trail, he had travelled in a bus reinforced with bulletproof material that was mocked as the "Bibibus" and drew comparisons to the "Popemobile".

Addressing a sparse crowd in a community theatre in Migdal Haemek, a Likud stronghold, Netanyahu condemned last month the short-lived government formed by his rivals as "a dangerous and catastrophic experiment".

In the crowd was Rachel Cohen, a 25-year-old secretary, who said she was "100 per cent" certain Netanyahu would win, arguing that unlike his rivals "he cares about the country".