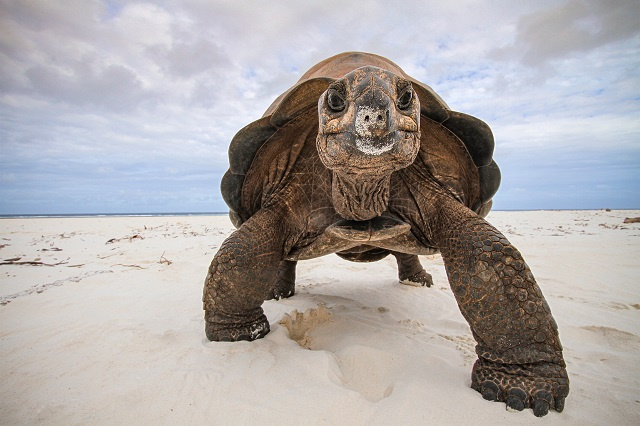 Researchers at the University of Zurich (UZH) have decoded the entire genome of the Seychelles' endemic Aldabra giant tortoise (Aldabrachelys gigante), which will allow scientists to better study the diversity of the species.

The statement was made by the director of Indian Ocean Tortoise Alliance (IOTA), Rich Baxter, in an interview with SNA after the completion of the study, which was published in October 2022.

IOTA, a Seychelles-anchored non-profit organisation, was initiated at a Paris Peace Conference in 2018 by a group of conservationists and philanthropists.

The Aldabra giant tortoise is listed as vulnerable to extinction on the Red List of the International Union for Conservation of Nature (IUCN), which means that the species face a high risk of extinction in the wild.

The only surviving tortoises in the wild can be found on the Aldabra Atoll, a UNESCO World Heritage Site in Seychelles, in the western Indian Ocean. The atoll, which is situated 1,120 km southwest of the main island of Mahe, is home to the world's largest wild Aldabra giant tortoise population of 100,000.

Baxter said that the study "now completes the genomes of all the tortoises existing in the Western Indian Ocean and this discovery will help identify the various tortoises found on Aldabra."

According to the press statement, "assembling the species' full genetic code makes it possible to determine genetic differences between individual Aldabra giant tortoises in the wild or in captivity.[...] Moreover, the data could be used to monitor the genetic diversity of rewilded or restored giant tortoise herds in Seychelles."

In the press statement, Baxter said that "being able to measure genetic diversity between individuals within a population is essential as we start to repopulate islands with tortoises in the Seychelles."

"By mixing and matching tortoises with different genetic makeups, we can ensure the highest possible level of genetic diversity of tortoises on islands, reducing potential harmful effects of inbreeding. Having high genetic diversity also matters for enabling a population's ability to respond to changes such as the effects of climate change," he added.

The reference genome will also allow researchers to determine the genetic differences between populations on the Aldabra Atoll but also determine from which population a specific tortoise originates, which could have further use in tracking tortoises in the pet trade.

The first author of the study, Gözde Çilingir, said "We found that most of the genome is similar to other known genomes of tortoises. This means our data will help the conservation efforts for other tortoise species across East Africa and Madagascar."

The next steps from this work by researchers at UZH will be to investigate how DNA can be used to determine the age of animals that are still alive, as the exact age of such extremely old tortoises is often unknown, and potentially reveal the secret on how tortoises are able to live so long.