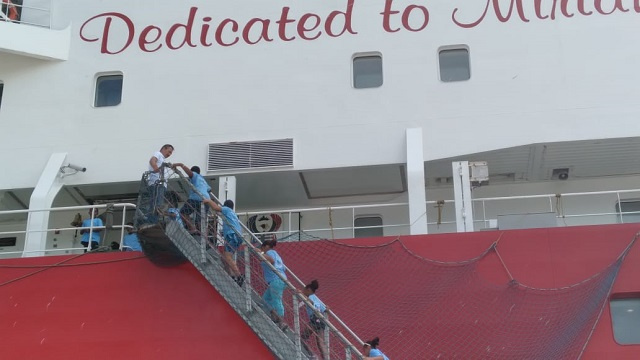 The visit was part of a project that teaches students about the marine environment and conservation techniques among others. (Rita Joubert Lawen, Seychelles News Agency)

Students from several schools in Seychelles who work hard to learn all about the ocean had the chance to visit the Monaco Explorations' research vessel 'S.A . Agulhas 2' in Port Victoria on Monday.

The visit was part of a project that teaches students about the marine environment, conservation techniques, ecosystems and how to identify the different fish and coral species.

The visit on board the vessel was to deepen and broaden their knowledge with the scientists giving them an unforgettable experience, according to the organisers.

The first group of students was from the Perseverance Secondary and International School of Seychelles on the main island of Mahe and those from Baie Ste Anne from Praslin.

As part of their tour of Agulhas II, crew members showed the students what work was carried out on the vessel and held a series of educational activities for them to take part in.

"It was an interesting visit," said a student from the International School who added that "I want to be a marine biologist later on, and the information today has helped me."

The group of students from Baie Ste Anne Praslin Primary was the one which took part in the PAREO Project for the past four months. PAREO stands for the 'Coral Reef Heritage of the Indian Ocean in our hands' in French and is supported by scientists of the Research Institute for Sustainable Development (IRD) in France and by the Seychelles Parks and Gardens Authority (SPGA).

Accompanied by their teachers, they attended a short workshop on how to illustrate the various things that are seen out at sea such as whales.

The students on the tour were also able to interact with Magalie Rocamora – a Seychellois scientist who was also on board the vessel for the last few weeks.

Rocamora was part of a group of eight Seychellois scientists on board the vessel taking part in the expedition.

Onboard the Monaco Explorations vessel, which arrived in the Seychelles waters on Thursday, 20 October, is a group of between 15 and 20 Seychellois participants - including students, scientists, representatives of the Blue Economy department and a local diver.

The team of over 80 scientists from Monaco, France, Seychelles, Reunion, and Mauritius spent a week on the atoll carrying out scientific work on coral, mangroves, seabed, turtles, and much of the flora and fauna around and on Aldabra.

On the departure of the vessel, the scientists launched a profiling float in the Seychelles waters as part of the "Adopt a Float" programme.

The lead scientist for this part of the expedition, Herve Claustre, said the floats will complement and fill informational gaps they have on data on the waters in the region.

General » Be a reporter: Write and send your article » Subscribe for news alert
Tags: Monaco Explorations