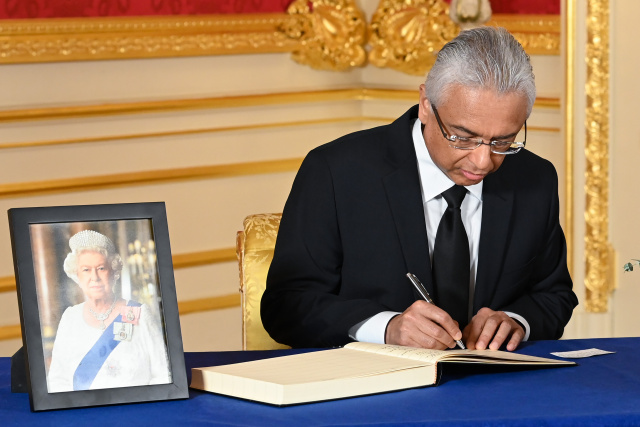 (FILE) Mauritius' Prime Minister Pravind Jugnauth signs a book of condolence at Lancaster House in London on September 18, 2022 following the death of Queen Elizabeth II on September 8. Britain was gearing up Sunday for the momentous state funeral of Queen Elizabeth II as King Charles III prepared to host world leaders and as mourners queued for the final 24 hours left to view her coffin, lying in state in Westminster Hall at the Palace of Westminster. (Photo by Jonathan HORDLE / POOL / AFP)

(AFP) - Britain's foreign minister said Thursday the UK and Mauritius have agreed to hold talks on the future of the disputed Chagos Islands.

Mauritius claims the remote archipelago in the Indian Ocean in full but it is administered by Britain, which has a joint military base there with the United States.

Foreign Secretary James Cleverly said in a written ministerial statement that the countries "have decided to begin negotiations on the exercise of sovereignty over the British Indian Ocean Territory / Chagos Archipelago".

He said they had agreed to hold "constructive negotiations" and hope to reach an agreement early next year.

This follows a meeting in September between the countries' prime ministers at the United Nations General Assembly.

Cleverly said the UK intends to "resolve all outstanding issues, including those relating to the former inhabitants of the Chagos Archipelago".

The countries agreed that a joint UK and US military base on Diego Garcia, the largest of the isles, will continue to operate whatever the results of the talks, the minister said.

In 1965, Britain decided to separate the islands from Mauritius and set up a military base there.

Mauritius, which became an independent Commonwealth country in 1968, has long fought to return the archipelago to its territory and has gained international support for its cause.

A 2019 International Court of Justice ruling backed the claim by Mauritius and said Britain should give up control of the islands.

Later that year, the UN General Assembly overwhelmingly voted in favour of a resolution recognising that "the Chagos Archipelago forms an integral part of the territory of Mauritius" and recommending Britain withdraw within six months.

Britain, some 9,500 kilometres (5,900 miles) to the west from Chagos, has insisted the islands belong to London and refused to leave.