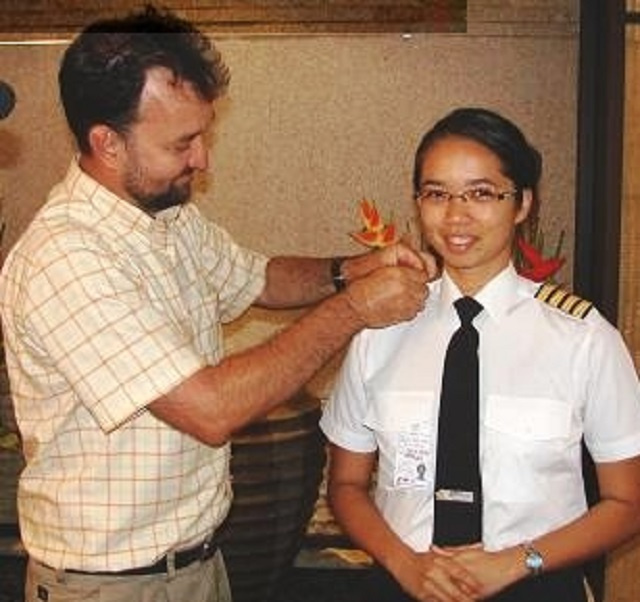 Chang Leng became the first female captain on August 21, 2007 when she received her epaulettes from captain David Savy, who was the Air Seychelles’ chief executive. (Seychelles Nation)

Seychelles' aviation community is mourning the loss of Nicole Chang-Leng, the first Seychellois woman flight captain, who passed away on Thursday, aged 45.

The President of Seychelles, Wavel Ramkalawan, on Friday sent a message of condolence to the family and friends of Chang-Leng.

"The country is mourning the sudden passing of a young, intelligent and dynamic Seychellois. Captain Chang-Leng was a professional who served her country with pride and humility. Her journey inspired many and she will remain a beacon of hope for all who aspire to live out their dream. She helped our national airline achieve high standards. The country will remember her as a true daughter of our soil. May her family be given courage as they go through this difficult period. May her soul rest in peace," said Ramkalawan.

Chang-Leng joined Air Seychelles, the national carrier, in 1997 as a co-pilot on the Twin Otter plane following her aviation training in South Africa. She became a Twin Otter pilot in 1999.

In 2001, she was transferred to international flight operations where she joined as First Officer on the B767 and completed her initial training and type rating in Miami, United States.

Chang-Leng became the first woman to command an all-female flight crew as commander on a Seychelles-Mauritius flight on August 23, 2007, and was the first Seychellois woman to captain Air Seychelles' B767 jets.

The former executive chairman of Air Seychelles, David Savy, who is also a former pilot, told SNA that "the aviation community has been hit particularly hard by the announcement of Nicole's untimely demise."

He expressed outright shock and disbelief at the news and added that Chang-Leng's passing "leaves a huge void both at a personal and professional one."

Savy who has worked with Chang-Leng for some time during her 25 years of employment at Air Seychelles described her as a dream employee who embodied and amplified every attribute one looks for in an airline pilot.

"Disciplined, dependable, loyal and systematically excelled in whatever she did. She dispelled a long-time myth that women only occupied lesser roles in an airline," he added.

Savy concluded that Chang-Leng proved to be a role model to so many irrespective of gender and that he feels "privileged to have had her in our lives and celebrate her outstanding and historical achievements."

Obituaries » Be a reporter: Write and send your article » Subscribe for news alert
Tags: Air Seychelles