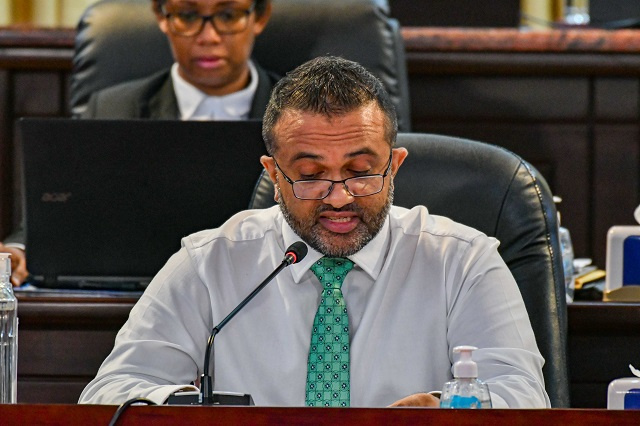 Government employees in Seychelles will get on average a 10 percent increase on their consolidated salaries at the beginning of April 2023, the Minister of Finance, Naadir Hassan, announced in his budget address in the National Assembly on Friday.

Hassan is seeking the approval of the National Assembly for a proposed budget of SCR10.4 billion ($816.4 million) for 2023.

The minister gave details on the budget performance for 2022 and said that the government has been able to surmount the biggest economic crisis that Seychelles has faced and will now share the benefits with the people.

"The 2023 budget is one that will distribute the results of the good work with the people and also ensure that the government can make more investment in infrastructure for the social welfare of the population and to expand our economy," said Hassan.

The four allowances that have been consolidated in the basic salary are the 5 percent supplementation allowance introduced in 2019, marketable skills allowance, graduate allowance and the performance allowance.

Since the revision is targetting government workers, Hassan called on employers in the private sector to evaluate and analyse if they can give an increase to their workers.

New in the budget will be the introduction of a sustainable environment levy for visitors as of April 2023.

Hassan said that the government currently spends SCR 436.5 million ($34.2 million) in the sector of environment and climate change.

"We can see that tourists are becoming more conscious of environment protection. But we recognize that the continuous increase in visitors when compared to our population, can impact our environment. So we have to look at ways for visitors to contribute towards sustainability of our natural resources," he explained.

The levy will also apply to yacht charters.

As of January 2023, the government will also impose a 2 percent tax on the revenue of medium to large hotels.

The minister said that the government is prioritising its expenditure where key sectors have been identified according to the national strategic development plan.

Hassan said that people's health remains a priority for the government and for the year 2023 a detailed study to reform the health system is being done.

The second highest allocation of SCR 1.34 billion ($1.01 million) will go to the education sector.

A budget allocation will also be made for international sporting events that Seychelles will be taking in next year.

"In 2023, our athletes will participate in two big competitions; the Indian Ocean Island Games and All Africa Games. The government will allocate SCR37 million ($2.7 million) to ensure the participation of our athletes in these two games," said Hassan.

Concerning social assistance, the minister said that the temporary measures announced this year which were expected to end on December 31 will now continue until March 2023 but will stop in April when the salary increase takes effect.

Hassan said that the government will also invest in rehabilitation facilities in 2023 a sum of SCR6.9 million ($582,000) to start the MAT (Medically Assisted Treatment) project.

He added that SCR 9 million ($69,000) will also be allocated for the Youth Hope Residential centre where "underage youth with attitude problems can be referred by the court to be rehabilitated. This will ensure that they are not placed in the same facility as an adult."

Before debating on the budget, next Thursday, November 10, the Leader of Government Business and the Leader of the Opposition in the National Assembly will give their responses to the proposed budget.