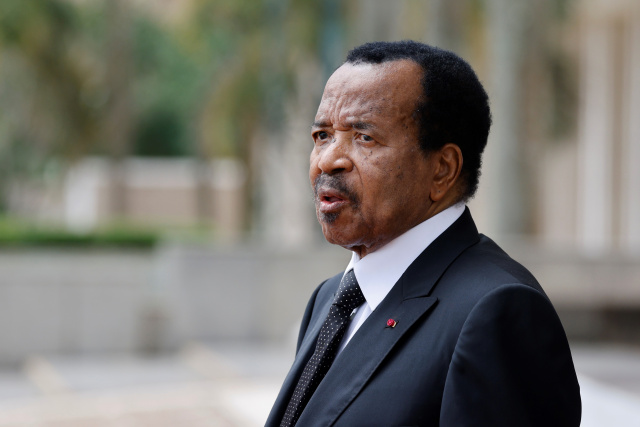 (FILES) In this file photo taken on July 26, 2022 Cameroon's President Paul Biya waits for the arrival of France's President Emmanuel Macron (unseen) for talks at the Presidential Palace in Yaounde. Paul Biya, who at the age of 89 will notch up 40 years in power this weekend, became one of the world's longest-serving leaders thanks to iron-fisted rule and the support of loyalists he appointed to key positions.
After seven years as the central African country's prime minister, he entered the presidential palace on November 6 1982, becoming only the second head of state since independence from France in 1960. (Photo by Ludovic MARIN / AFP)

(AFP) - Cameroon's 89-year-old president, Paul Biya, on Sunday marks the 40th anniversary of his rise to power amid splashy ceremonies where the word on everyone's mind -- succession -- will almost certainly be absent.

The Cameroon People's Democratic Movement (RDPC), which Biya founded in 1985, says it will hold "a big party" up and down the country to mark the anniversary.

The festivities will celebrate "political stability and peace -- the biggest successes of these last four decades in Cameroon," said Herve Emmanuel Nkom, a member of the party's central committee.

At the RDPC's headquarters in Messa district, a couple of dozen party members were busy selling caps, scarves, shirts and multi-coloured garments emblazoned with Biya's face.

"Lots of people come by and look -- we get a lot of orders," said Sylvie Beyala, 42, a party member for 20 years, next to a photo of a beaming Biya and the slogan "Unity, Progress, Democracy."

The crowning event on Sunday will be a "regional mega-rally" in front of city hall in Yaounde, the capital, but no word has emerged as to whether Biya himself will attend.

The anniversary bash aims to divert attention away from "the crucial question," said Stephane Akoa, a professor and researcher in political science.

"It's not whether Cameroon is doing well or could be doing better, but how the president is," he said.

Biya rose to the top job on November 6 1982 after seven years as prime minister.

He is only the second president in Cameroon's history since the central African nation gained independence from France. He is also the continent's longest-serving leader after Equatorial Guinea's Teodoro Obiang Nguema Mbasogo, who seized power in 1979.

Commentators ascribe Biya's extraordinary political longevity to a mixture of astuteness and ruthlessness -- he has a constellation of loyalists in key positions and crushes or sidelines opponents and rivals.

But his public outings, except for a few choreographed TV appearances, have become rarer and rarer in recent years, stoking speculation about his health.

Any official talk of succession is taboo, and none of the most visible figures around Biya has publicly uttered a word about entertaining any wish to succeed him.

"Ministers have fallen into disgrace just for thinking about a theoretical departure of the president," said Aimee Raoul Sumo Tayo, a defence and security specialist on Cameroon.

"Mr. Biya has put the saying 'divide and rule' into practice... forces which could have challenged him for power have been unable to get organised and, even less so, unify," said Akoa.

Even so, conversations about a successor are rife.

Those most commonly named are Biya's son, Franck Biya, and Finance Minister Louis-Paul Motaze. The younger Biya already has a discreet following among supporters called "Franckists."

Another name in the mix is that of Biya's right-hand man, the presidency's chief of staff, Ferdinand Ngoh Ngoh.

Reputed to have the backing of Biya's influential wife, Chantal Biya, Ngoh Ngoh has been the longest-serving chief of staff in the presidency's tenure.

He wields extensive de-facto authority through executive powers that have been delegated by Biya and, like his boss, also has his supporters in senior jobs, said Akoa.

"No (potential) candidate enjoys unanimity," said Akoa, adding that the succession debate "eclipses all other concerns, such as strategies for health, education and infrastructure."

The jockeying for power has been intensified by Cameroon's weak mechanisms for handing on presidential power in an emergency, said Sumo Tayo.

If the president becomes unable to continue in office, presidential authority is handed down in the interim to the speaker of the Senate -- currently 88-year-old Marcel Nial Njifenji, whose health is at least as much a concern as that of Biya.

The scenario stokes "the probability that certain parts of the army may intervene," said Sumo Tayo.

Military leaders appointed by Biya may fear their privileges will be at threat once he exits the scene, which increases the risk of turbulence, he suggested.