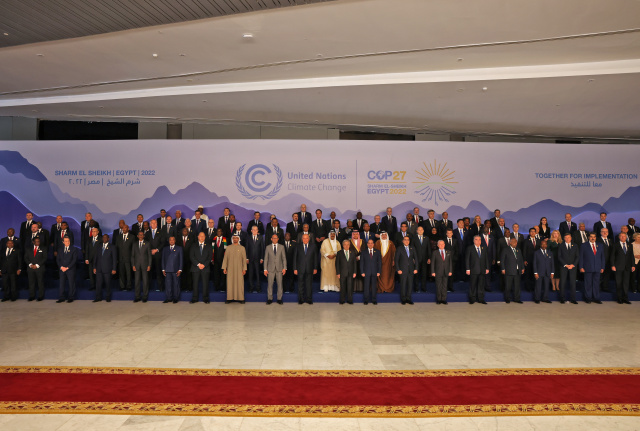 Participating world leaders stand for a commemorative group picture ahead of their summit at the COP27 climate conference, in Egypt's Red Sea resort city of Sharm el-Sheikh, on November 7, 2022. (Photo by AHMAD GHARABLI / AFP)

(AFP) - Humanity is in "the fight of our lives" as climate change intensifies droughts, floods and heatwaves, UN chief Antonio Guterres warned world leaders Monday at talks in Egypt on curbing global warming.

In the midst of a barrage of international crises battering economies and shaking international relations -- from the Covid pandemic and Russia's invasion of Ukraine to weather extremes -- Guterres said the international community faces a stark choice.

"Cooperate or perish," he told leaders at the UN COP27 summit in the Red Sea resort of Sharm el-Sheik. "It is either a Climate Solidarity Pact, or a Collective Suicide Pact."

Guterres called for a "historic" deal between rich countries and emerging economies that would aim to reduce emissions and keep the temperature rise to the more ambitions Paris Agreement target of 1.5 degrees Celsius above the pre-industrial era.

He said the target should be to provide renewable and affordable energy for all, calling on the top emitters, the United States and China, in particular to step up their efforts.

On the current trajectory, the UN chief said, "we are on a highway to climate hell with our foot still on the accelerator".

At around 1.2C of warming so far, impacts are already accelerating on all fronts.

Major droughts in the Horn of Africa have pushed millions to the edge of starvation, deadly floods in Pakistan swamped farmland and destroyed infrastructure, causing more than $30 billion in damage and losses according to the World Bank.

Meanwhile the global community is lagging behind both on efforts to cut planet-heating emissions and payments to vulnerable countries to help them build resilience and green their economies.

On Sunday, developing nations won a small victory when delegates agreed to put the controversial issue of money for "loss and damage" -- aid for the impacts already being felt -- on the summit agenda.

Guterres said it was a "moral imperative" for richer polluters to help vulnerable countries, which often are the least responsible for climate change.

He said the Ukraine war and an array of other crises facing the world may capture much attention, but stressed that many of these are linked to "growing climate chaos".

The UN chief also addressed the massive biodiversity loss that has seen human activity drive the planet's sixth mass extinction crisis, threatening the food we eat, water we drink and air we breathe.

"Let's not forget that the war on nature is in itself a massive violation of human rights," Guterres said.

The climate fight "will be won or lost in this crucial decade on our watch," he said.

And as the global population is estimated to hit 8 billion this month, Guterres reminded the world leaders gathered in Egypt that the decisions they make now and in the years to come will reverberate for generations.