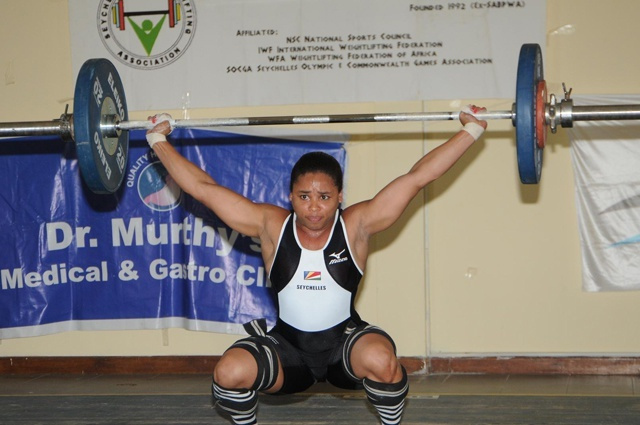 Malvina lifted 105kg in both the snatch and the clean and jerk in the competition. (Seychelles Nation)

Malvina, 38, who took part in the 59kg category, lifted 105kg in both the snatch and the clean and jerk in the competition, which was held from October 28-31 in Cairo.

"For me, it was a bit difficult as I had not trained, but I am satisfied with my performance," said Malvina, who said that her work schedule is the main reason why she cannot train as much as she would like.

Meanwhile, a three-member Seychelles team finished third in the 2022 African Weightlifting Championships, another weightlifting event held at the same time in Egypt.

The team finished with a total of three silver and three bronze medals, to finish behind Tunisia and host Egypt, who were second and third respectively.

Seychelles' silver medals came in the 76kg category from Joelita Coloma who lifted a total of 180kg - 80kg in snatch and 100kg clean and jerk- to finish behind Egypt's Roufida Fathi, whose total lift was 210kg - 90kg snatch and 120kg clean jerk.

Coloma told reporters at the airport upon the return of the Seychelles' team that "it wasn't an easy competition, but I had no choice except to fight for a good result and managed to improve on my personal best, which I am happy with."

Another weightlifter in the team, Romentha Larue, claimed three bronze medals when she lifted a total of 198kg with 87kg in the snatch and 111kg for the clean and jerk in the +87kg category.

She finished third behind two Egyptians, Halima Abdelazim, who won the gold medal with 124kg, and Shaimaa Khalaf, who finished second.

Abdelazim's snatch performance was in fact a new African record.

"I am satisfied with my performance as I was able to improve on my previous best. I think there has been a lot of improvement and I think with better preparation, I could have done better," said Larue.