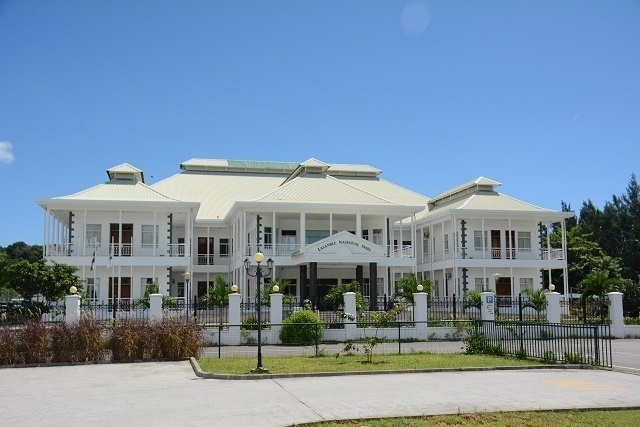 Hassan is seeking the approval of the National Assembly for a proposed budget of SCR10.4 billion. (Seychelles News Agency)

The two leaders in the Seychelles National Assembly gave their responses on Thursday to the 2023 budget presented by the finance minister, Naadir Hassan, last week.

Hassan is seeking the approval of the National Assembly for a proposed budget of SCR10.4 billion ($816.4 million) for 2023.

In his response the Leader of the Opposition, Sebastien Pillay, said that the budget seeks to make damage control and the first subject he looked at was the cost of living which he said is very high today.

He spoke about the 10 percent salary increase starting April 2023.

"If the money has been budgeted, why is the increase not starting in January? We ask that all workers are backdated their salaries from January. This will really show if the government is serious with the increase," he said.

The Leader of the Opposition said that the government measures must be comprehensive.

"I make a plea on behalf of the pensioners and retirees. I call on the government to remove the SCR 1,000 that will be taken from people in elderly homes and also give a raise in their social security."

On the health sector, which is getting a budget of SCR 1.38 billion ($1.08 million), Pillay said that there is a need for discussion on the deficiencies in the Ministry of Health.

"Many Seychellois are complaining about the services they are getting. [...] We can put millions in the health sector but if we do not have good leadership nothing will work," he added.

On education, with the second top budget allocation of SCR 1.34 billion ($1.01 million), he said that it is not acceptable that the teacher scheme of service will not be revised in the coming year while many teachers are already retiring.

He concluded by reiterating that this budget is one being made for damage control.

On his side, the Leader of Government Business, Bernard Georges, said the budget shows how far Seychelles has come in the last two years.

He said the budget is one that shows that the government is one that takes responsible, discipline and decisive decisions for the welfare of its people.

"The budget is one that is positive and one that the government managed to do in two years and it gives hope to our people. Some of the measures that will bring benefits for each Seychellois is a salary increase of 10 percent. At a moment where inflation has increased by 3 percent, a 10 percent salary increase is a bonus for this category of workers," he said.

Georges added that Minister Hassan has given Seychelles a budget that is positive in all aspects and one that brings relief and also looks at sectors like sports and culture.

He called on every Seychellois to stop living in negativity and that "we have come out of a difficult moment and we are entering a moment where the lives of Seychelles are improving."

"Although Seychelles will always have challenges because we are small, we are far and our economy is based on only three pillars, although we are at the mercy of superpowers and vulnerable to external shock and climate change, today we have a reason to celebrate," said Georges.

He concluded by asking "each Seychellois to look at where we came from,  where we were two years ago and think about the distance we have covered in a short period of time."