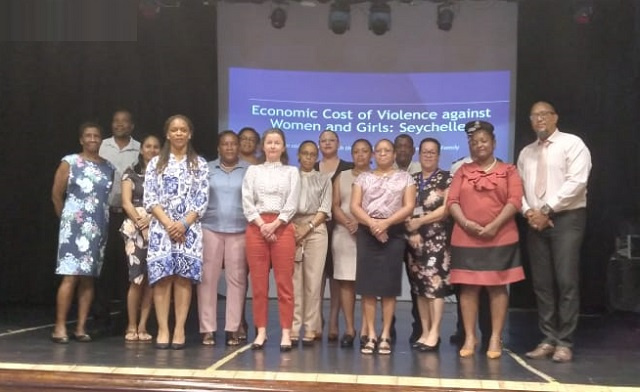 Various parties concerned with curbing violence against women and girls in Seychelles met on Thursday to discuss the findings of the study and provide their input. (Rita Joubert Lawen)

Seychelles will use the results of a study that concluded in 2019 to address the cost of violence against women and girls while a Domestic Violence Act passed in the National Assembly is expected to come into force soon.

The study, which began in 2017 came after the Seychelles government asked the Commonwealth for assistance to carry out a study to determine how violence against women and girls, also affects the country's economy.

Various parties concerned with curbing violence against women and girls in Seychelles met on Thursday to discuss the findings of the study and provide their input.

Commonwealth consultant Monika Pindel, who worked on the study with local partners, said that "there was a need for economic costing for understanding the costing or financial burdens on the economy, on the individuals on the private sector and on the government of this issue."

Pindel said that Seychelles is the first small island state to do the study which "looks at the priorities and areas that we could cooperate on to help to address and manage the situation. We wanted to be a little bit more ambitious in comparison with what has happened before – we were looking at direct and indirect costs."

The research looked at the cost to the public health system, the doctors' fees, which could include a psychologist, and also calculated how much police time would cost and what funding is earmarked for this kind of activity.

Those who attended the meeting were originally involved with the study including representatives from civil society, law enforcement as well as the family affairs department.

"What had not been done before is the macroeconomic level analysis which then helps to see the impact of the inaction on violence on every sector of the economy," explained Pindel when presenting a framework guide.

On his side, the principal secretary for family, Clive Roucou, said that the framework "enabled a more in depth understanding of the actual costs of violence against women and girls and thus has the potential to contribute to raising awareness of the scale of the problem and increase willingness to act."

He added that the guideline can be used as a baseline from which to conduct a cost-benefit analysis of potential interventions aiming at the prevention and management of violence.

Pindel said that this tool will help bring understanding to the economy, as well as the financial burdens on the economy, individuals, the private sector and the government.

"When you understand that for instance in 2016 the cost to the Seychellois economy was 4.6 percent then you can start working on this issue, understand what's happening. You understand that you need resources to address this issue. So these types of arguments are very helpful for the government policymakers in designing and implementing policy and legislation and other interventions," added Pindet.

Pindel added that "the Commonwealth will not be making proposals as to how Seychelles can address the issue but is rather depending on the Seychellois who are the experts on this issue."

In order to come up with comprehensive information, the Commonwealth also worked with the Attorney General on the Domestic Violence Act that was passed in 2020 and is going to be implemented shortly.

Another country embarking on such a study is Lesotho is taking a slightly different approach in the second phase.

"They have taken another macroeconomic way of approaching this; they are actually going to pilot gender responsive budgeting, which is essentially budgeting that focuses on the citizens," said Pindel.

Lesotho's approach means that it will have to carry out an analysis to identify the needs of both men and women and boys and girls then use the information to assign sufficient funding to activities that can help and support communities that need it.

"A slightly different trajectory, but we're hoping to get to the same results," Pindel said of the approach.