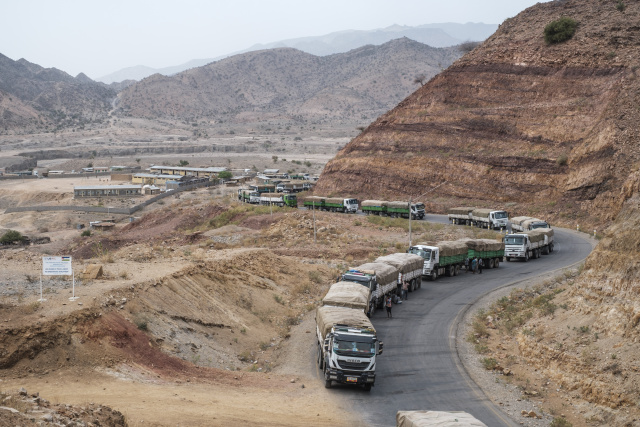 (FILES) In this file photo taken on June 09, 2022, A convoy of trucks part of a convoy of the World Food Programme (WFP) on their way to Tigray are seen in the village of Erebti, Ethiopia. The Ethiopian government said on November 11, 2022, that 70 per cent of the war-stricken northern region of Tigray was now under federal army control and that aid was being sent in, claims swiftly denied by Tigrayan rebels. (Photo by EDUARDO SOTERAS / AFP)

(AFP) - The Ethiopian government said Friday its forces controlled 70 percent of the war-stricken northern region of Tigray and that aid was being sent in -- claims swiftly denied by Tigrayan rebels.

The restoration of desperately needed humanitarian assistance to the region is one of the key planks of a peace deal between the federal government and the Tigray People's Liberation Front (TPLF) to end two years of brutal war in northern Ethiopia.

The contradictory claims come as representatives of the warring sides have been meeting in the Kenyan capital Nairobi to follow up on the breakthrough agreement signed in the South African capital Pretoria on November 2.

"Aid is flowing like no other times," he said, adding that trucks of food and medicine had been sent to the strategic city of Shire and that flights were being allowed.

"No hindrance whatsoever regarding aid."

But the rebels denied Redwan's assertions.

"He is plucking his facts out of thin air," TPLF spokesman Getachew Reda told AFP in a message.

AFP was not able to independently verify the claims as Tigray -- a region of about six million people -- remains inaccessible to journalists.

Ethiopia's northernmost region is in the grip of a severe humanitarian crisis due to lack of food and medicine, and there is limited access to basic services including electricity, banking and communications.

Redwan's comments were also dismissed by a humanitarian worker based in Tigray.

"What Redwan tweeted is completely false," the worker told AFP. "No aid is allowed to enter Shire city at all.

"No services have been reconnected and no flights are allowed."

- 'Many dying of starvation' -

The peace deal was signed after little more than a week of African Union-brokered negotiations between federal government and TPLF delegations.

It notably calls for the cessation of hostilities, restoration of humanitarian aid, the re-establishment of federal authority over Tigray and the disarming of TPLF fighters.

Military chiefs from the warring sides have been holding talks in Nairobi this week to discuss disarmament and the restoration of aid among other issues.

The US State Department's African bureau noted that Redwan had said in Nairobi that by week's end humanitarian aid would flow "unhindered".

"Also restoration of services, protection of civilians & human rights accountability. Waiting urgently for actions to respect and implement the agreement."

On Wednesday, the World Health Organization called for a massive influx of food and medicines into Tigray following the ceasefire deal, saying aid had not yet been allowed in.

"Even in the middle of fighting, civilians need food, need medicine. It cannot be a condition."

The conflict between the TPLF and pro-Abiy forces, which include regional militias and the Eritrean army, has caused an untold number of deaths, forced more than two million from their homes and sparked reports of horrific abuses such as rape and massacres.

Estimates of casualties vary widely, with the United States saying that as many as half a million people have died, while the EU's foreign envoy Josep Borrell said that more than 100,000 people may have been killed.

UN-backed investigators have accused all sides of committing abuses but also charged that Addis Ababa had been using starvation as a weapon of war -- claims denied by the Ethiopian authorities.

Abiy -- a Nobel Peace Prize laureate -- sent troops into Tigray on November 4, 2020 to topple the TPLF, the region's ruling party, in response to what he said were attacks by the group on federal army camps.

The conflict capped months of simmering tensions between Abiy and the TPLF which has dominated the national government for almost three decades until he took office in 2018.