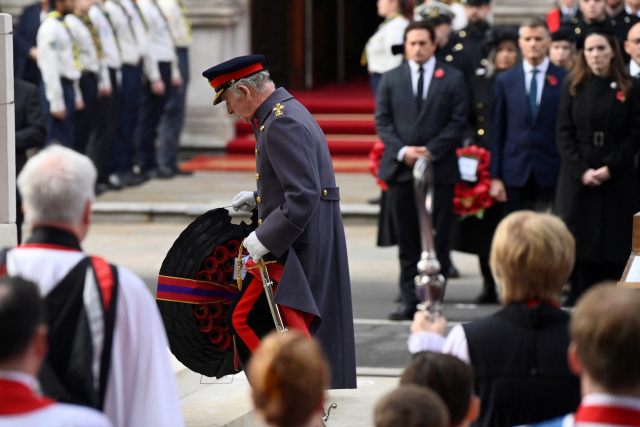 Britain's King Charles III lays a wreath at The Cenotaph during the Remembrance Sunday ceremony on Whitehall in central London, on November 13, 2022. Remembrance Sunday is an annual commemoration held on the closest Sunday to Armistice Day, November 11, the anniversary of the end of the First World War and services across Commonwealth countries remember servicemen and women who have fallen in the line of duty since WWI. (Photo by TOBY MELVILLE / POOL / AFP)

The 73-year-old monarch had previously deputised for his mother Queen Elizabeth II, who died in September aged 96 after a year of failing health.

Since 2017, she had watched the annual service from a balcony of the foreign ministry overlooking the Cenotaph in central London.

Last year a back complaint forced Elizabeth to miss the ceremony, just weeks after an unscheduled overnight stay in hospital.

Charles, who served in the Royal Navy in the 1970s, laid a wreath on her behalf.

Now king and commander-in-chief of British forces, he laid his first wreath at the war memorial as reigning monarch, dressed in a field marshal's ceremonial uniform.

Charles stood in silence after depositing the ring of red artificial poppies -- Britain's symbol of remembrance.

The wreath was mounted on black leaves, with a ribbon in the king's scarlet, purple and gold horseracing colours.

Two minutes' silence was observed after Big Ben tolled 11 times, marking the resumption of full operations for the newly restored Great Clock in the nearby Houses of Parliament.

Cannon fire marked the beginning and end of the silence, culminating in buglers playing the Last Post in front of the Cenotaph, before UK politicians and Commonwealth ambassadors laid their own wreaths.

"This year more than ever, we are reminded of the huge debt of gratitude we owe those who lay down their lives to protect their country," Sunak said in a statement.

"As we fall silent together on Remembrance Sunday, we will honour the memories of the men and women we have lost, and pay tribute to the brave soldiers of Ukraine as they continue their fight for freedom."

Speaking to Sky News, Chief of the Defence Staff Admiral Tony Radakin said there was particular emotion attached to this Remembrance Sunday.

"I think there's a special poignancy this year with both the loss of Her Majesty, another loss of a Second World War veteran," he said.

"I also think it's poignant when we have once again the spectre of war in Europe and all that that entails, and a country that's been invaded and is fighting for its freedom," he said, referring to war in Ukraine.

Remembrance Sunday in Britain is the culmination of days of events to pay tribute to all those who lost their lives in conflict.

On Thursday Queen Consort Camilla laid a cross at the Field of Remembrance outside London's Westminster Abbey, alongside 70,000 other symbols left by military associations, and a space dedicated to Elizabeth.

On Friday -- Armistice Day, marking the end of hostilities in World War I -- a service was held at the National Memorial Arboretum in central England.

On Sunday, around 10,000 veterans marched past the Cenotaph including 400 who fought in the Falklands War, 40 years ago.