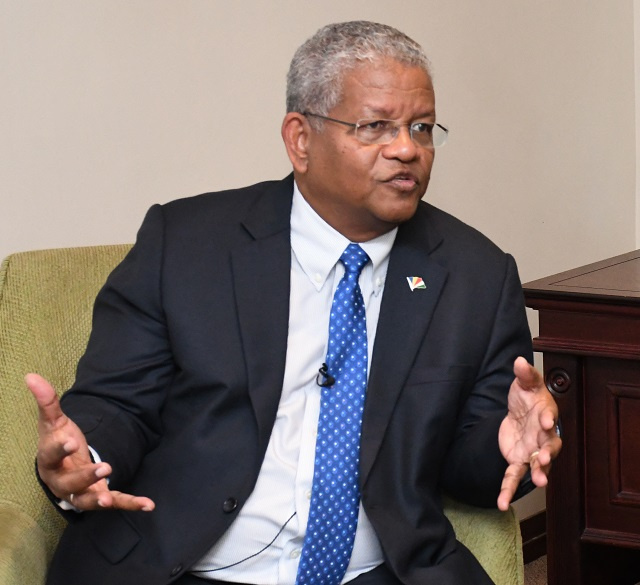 Ramkalawan made the announcement to reporters at the Seychelles International Airport on Sunday just after his return to the country. (Seychelles Nation)

Seychelles will explore new areas of cooperation in education, security, youth and agriculture following bilateral talks President Wavel Ramkalawan held with leaders and representatives of several countries on the sidelines of the 27th Conference of the Parties (COP27) in Egypt.

Ramkalawan made the announcement to reporters at the Seychelles International Airport on Sunday just after his return to the country.

He said that new avenues of cooperation in the areas of youth, agriculture and imports are being explored with Tanzania and that a Seychelles delegation will follow up soon with a visit to the eastern African country.

Ramkalan met his counterpart from Madagascar, Andry Rajoelina, where the subject of the gold seized onboard a vessel was raised.

Five Malagasy nationals and one Seychellois were arrested in October 2021 on suspicion of alleged gold smuggling after 23 kg of gold onboard their vessel was found.

"Seychelles has agreed to return the gold to Madagascar and in return, they will pay a percentage on that," said Ramkalawan.

Meanwhile,  Seychelles is negotiating to claim the Aldabra plateau around the remote atoll with which it shares a maritime boundary with Madagascar.

The President said that since this has not yet been completed a Seychellois team was in Madagascar to finalise it.

Following a United Nations body ruling in August 2018 and an official confirmation on August 31, 2018, Seychelles was granted an extension of its territorial waters by 14,800 square kilometres, extending the continental shelf of the Northern plateau.

Ramkalawan said he will meet Rajoelina next week at the Francophonie Summit "to finalise a few more things, after which Seychelles and Madagascar will make a joint statement on their agreements."

Seychelles' President said he had "the chance to talk to the Israeli Prime Minister, as it is a country that we already have certain agreements that we have to sign in the area of security."

Seychelles is seeking assistance from Israel "in border control, in fact, there is a group from that sector in Seychelles headed to Israel for assistance in that area."

He also met with Egyptian Minister for Justice Omar Marwan to discuss the plight of the three Seychellois men in prison in Egypt.

"I spoke to their Minister for Justice to look at the different elements of the case. Although at the moment Egypt is not willing to talk about the subject," he added.

The three Seychellois - Ronny Norman Jean, Yvon John Vinda and Dean Dominic Loze - were sentenced to death by execution on April 7, 2013 after being found guilty of drug trafficking. In 2015, their sentences were commuted to life imprisonment.

Over the years, the Seychelles government has been in constant talk with the Egyptian authorities

"We have to respect that country, but that does not mean that we will stop talks to see how we can assist our Seychellois brothers," said Ramkalawan and added that the men are no longer in the prison they were sentenced to, but have now moved to Cairo which makes it easier for visits.

"It is unfortunate that I have to tell their families that Egypt's position is very serious on the matter," he said.

Discussions were also held with the newly elected President of Kenya, William Ruto, on the 10 agreements the two countries signed when former President Uhuru Kenyatta visited Seychelles in July.

He said that Ruto has pledged to "work on all the agreements we had signed as soon as he is settled in office.".

Ramkalawan also had the chance to speak to his colleagues – the Sri Lankan President, Ranil Wickremesinghe, and Maldives Vice President, Faisal Naseem, who have also promised links for cooperation as soon as they are in a better position to do so.

"We will see how we can work closely with each other in the Indian Ocean," he said.

Diplomacy » Be a reporter: Write and send your article » Subscribe for news alert
Tags: Conference of the Parties