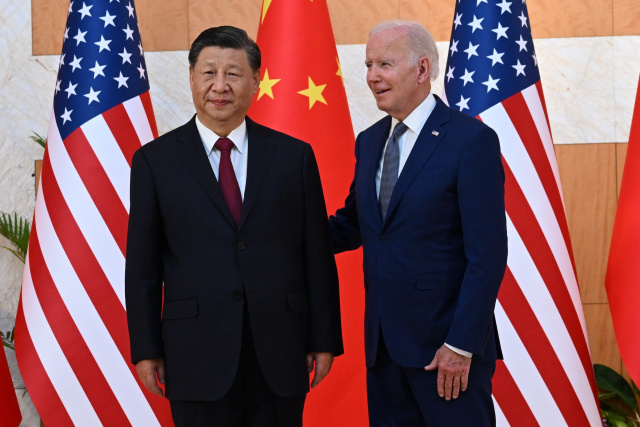 US President Joe Biden (R) and China's President Xi Jinping (L) meet on the sidelines of the G20 Summit in Nusa Dua on the Indonesian resort island of Bali on November 14, 2022. (Photo by SAUL LOEB / AFP)

(AFP) - The United States and China will resume cooperation on fighting climate change that Beijing had halted in anger after US House Speaker Nancy Pelosi visited Taiwan, the White House said Monday.

China scrapped a series of talks and ripped up cooperation agreements with Washington, including on tackling global warming, after Pelosi, second in line to the US presidency, visited Taiwan in August.

But after US President Joe Biden and his Chinese counterpart Xi Jinping held talks on Monday in Bali, Indonesia, the White House said the superpowers had agreed to resume work on "transnational challenges".

"President Biden underscored that the United States and China must work together to address transnational challenges –- such as climate change, global macroeconomic stability including debt relief, health security, and global food security," the White House said in a statement.

"The two leaders agreed to empower key senior officials to maintain communication and deepen constructive efforts on these and other issues."

China's foreign ministry in a statement said it was in the "mutual interest" of both sides to "promote post-Covid global recovery, tackle climate change and resolve regional issues through China-US coordination and cooperation".

The leaders agreed to "jointly work for the success" of the COP27 climate conference under way in Egypt's Sharm el-Sheikh, the statement added.

The news was welcomed by climate activists, with Ani Dasgupta, president and CEO of World Resources Institute, saying the global community was "breathing a sigh of relief".

"There is simply no time left for geopolitical fault lines to tear the United States and China away from the climate negotiation table," Dasgupta said.

He urged the world's top two emitters to commit to "bolder action to rein in methane emissions" and called on them to "address increasingly severe impacts from climate change".