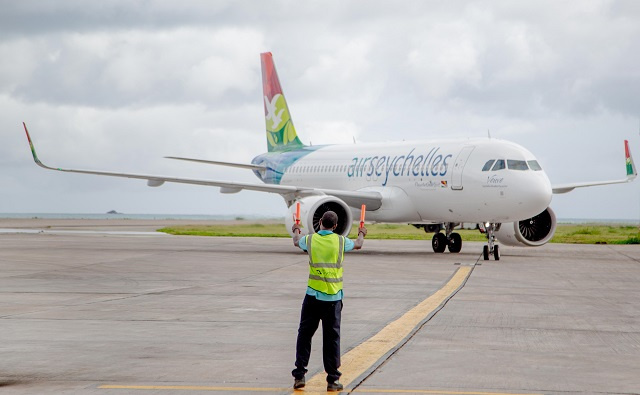 Seychelles' flagship airline, Air Seychelles, has been officially removed from administration and the company's board of directors is now back in charge, said a top official on Monday.

Antony Derjacques, the Minister for Transport, Civil Aviation and Marine, told reporters that "today is a very happy occasion, as we announce that Air Seychelles is out of administration after 13 months."

Air Seychelles went into administration in October 2021 after it faced financial difficulties, mainly due to significant debt that was incurred during the stewardship of the airline by Etihad Airways, which was previously a 40 percent shareholder in the company.

A petition was filed by the Apex Trustees Bondholders on August 19, 2021, for the winding up of Air Seychelles to recuperate investment made in the national carrier of Seychelles, an archipelago in the western Indian Ocean

Two administrators were appointed, Suketu Patel and Bernard Pool, to consider the optimum ways of restructuring the company and settling its debts.

The winding-up petition was withdrawn in May after the airline was able to provide the settlement funds of approximately $28 million in escrow, which means it was being held by a third party until all transactions are fulfilled.

The agreement for Air Seychelles to pay off only $28.3 million out of the $76 million initial debt owed to bondholders as part of the airline's rescue plan was made between the airline's administrators and its creditors.

Derjacques explained that the $28.3 million paid came partly from the company's own coffers, while the Seychelles government lent Air Seychelles a further $13 million to cover the whole cost.

Air Seychelles will not be expected to repay the loan to the Seychelles government for six years and the minister said that if all goes well, the loan could even be written off by then.

"The rescue plan for Air Seychelles was presented to court recently, where on November 7, 2022, that plan was accepted and a day later, the board of directors signed a resolution that they will execute that plan," he said.

Air Seychelles, the national airline of Seychelles, was established in 1978 and began long-haul service in 1983. The airline offers both international and domestic flights and provides ground handling and cargo services to over 12 airlines operating at the Seychelles International Airport at Pointe Larue.

The acting chief executive of the company, Sandy Benoiton, stressed that Air Seychelles' operations will continue as normal.

"I want to ensure all staff that nothing will change with regards to ground handling, where there will not be any staff needing to move to another company or anything like that and no staff will lose their jobs," explained Benoiton.

He added that Air Seychelles is well ahead of its five-year plan approved in 2021.

However, there are questions on the leadership of the company as both its CEO and chief financial officer, Tyrian Gendron, have not been confirmed in post.

Derjacques said that with the work they have done during this tough period, it will be an easy decision for him to recommend both men for their respective positions on a permanent basis.

The chairperson of the Air Seychelles board of directors, Veronique Laporte, has said that she is very pleased with the work that has been done by everyone at the company.

"We are very pleased with the management of Air Seychelles and we want to thank everyone that has supported the company so that we could achieve what we have today," said Laporte.