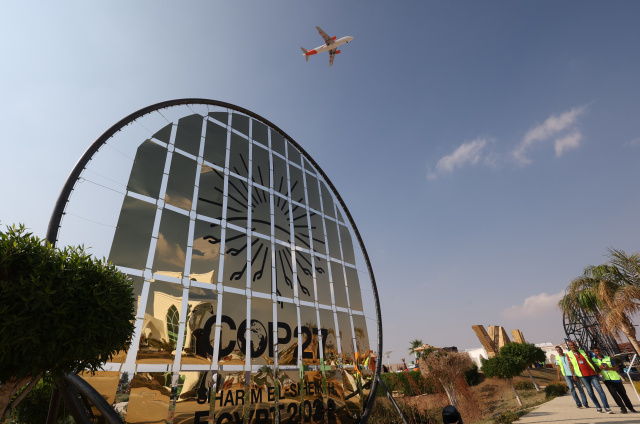 An aeroplane flies over the Sharm el-Sheikh International Convention Centre, in Egypt's Red Sea resort city of the same name, during the COP27 climate conference, on November 15, 2022. (Photo by Fayez Nureldine / AFP)

(AFP) - The EU vowed Tuesday at UN climate talks to raise its emissions reduction target, as developing nations admonished rich polluters for falling short on efforts to help them cope with global warming.

The COP27 conference in Egypt has been dominated by calls for wealthy nations to fulfil pledges to fund the green transitions of poorer countries least responsible for global emissions, help build their resilience, and compensate them for climate-linked losses.

The meeting comes as global CO2 emissions are slated to reach an all-time high this year, making the aspirational goal of limiting warming to 1.5 degrees Celsius compared to preindustrial levels ever more elusive.

European Commission Vice President Frans Timmermans told delegates that the European Union would exceed its original plan to reduce its greenhouse gas emissions by 55 percent by 2030.

The 27-nation bloc will now be able to cut those emissions by 57 percent from 1990 levels, he said, pointing to agreements on phasing out fossil fuel-powered cars and protecting forests that serve as "carbon sinks".

The invasion of Ukraine by energy exporter Russia has cast a shadow over the talks in Egypt, with activists accusing Europeans of seeking to tap Africa for natural gas following Russian supply cuts.

But Timmermans denied the bloc was in a "dash for gas" in the wake of the Ukraine conflict.

"So don't let anybody tell you, here or outside, that the EU is backtracking," he said.

Watchdog groups were not impressed.

"This small increase announced today at COP27 doesn't do justice to the calls from the most vulnerable countries at the front lines," said Chiara Martinelli, of Climate Action Network Europe.

"If the EU, with a heavy history of emitting greenhouse gases, doesn't lead on mitigating climate change, who will?"

Belize Climate Change Minister Orlando Habet called for more action from the G20 group of the world's wealthiest nations, which are responsible for 80 percent of global emissions and are meeting at a summit in Indonesia.

"In how many COPs have we been arguing for urgent climate action? And how many more do we need, how many lives do we need to sacrifice?" Habet said.

"We the people of Saint Lucia suffer the consequences of this hypocrisy," he said, describing millions of dollars in damages caused by a recent tropical storm that wracked his island nation.

UN climate negotiations often go into overtime and COP27, scheduled to end on Friday, could be no different.

The first draft of the final declaration -- which must be approved by all parties -- only has bullet points so far, including a line on the "urgency of action to keep 1.5C in reach", something top emitter China has opposed in the past.

Wealthy and developing nations are sharply divided over money.

Developing countries say this year's floods in Pakistan, which have cost the country up to $40 billion, have highlighted the pressing need to create a "loss and damage" compensation fund.

In a small breakthrough, the United States and the European Union agreed to have the issue discussed at COP27, though they favour using existing financial channels.

The draft declaration mentions the "need for funding arrangements to address" loss and damage -- language previously used by the United States and Europeans.

Timmermans told reporters that the EU has "demonstrated openness to discuss moving forward on loss and damage" but that he was "not quite sure we would be able this week to find consensus on the new financial mechanism".

Conrod Hunte of Antigua and Barbuda, lead negotiator for the Alliance of Small Island States, said stalling talks would be a "devastating blow".

"Antigua and Barbuda will not leave here without a loss and damage fund," he said.