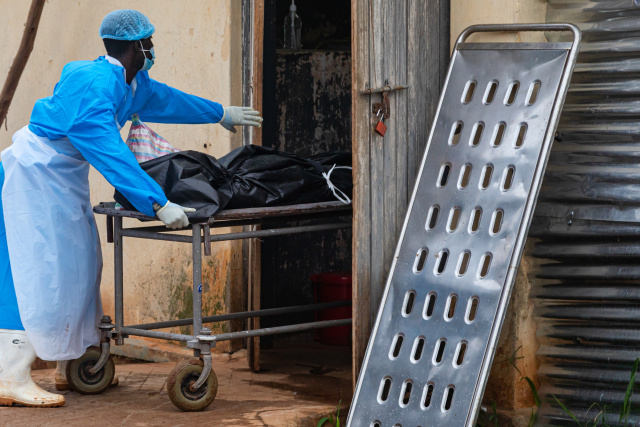 Photo taken on October 27, 2022, shows workers at Mubende referral hospital moving a body bag containing the body of a man suspected of dying from Ebola in Mubende, Uganda. Uganda has registered 32 recorded deaths and 115 confirmed cases from an outbreak of the Ebola- Sudan virus. The first death from this outbreak of the Ebola-Sudan strain was announced on 19 September and as yet, there is no vaccine for this strain. (Photo by BADRU KATUMBA / AFP)

(AFP) - Uganda's President Yoweri Museveni on Tuesday urged foreign visitors not to cancel their plans over fears of the Ebola outbreak in the East African nation, insisting that the disease was under control.

Since the outbreak was declared in the central district of Mubende on September 20, cases have spread across the country, including to the capital Kampala, with 55 deaths reported nationwide, according to Ugandan authorities.

But Museveni has dismissed talk of a nationwide lockdown, saying it is not needed.

In an address to the country late Tuesday, he said the Ebola outbreak was limited to six out of 146 districts in Uganda.

"I have been informed that some tourists have cancelled their visits to Uganda, postponed hotel bookings and some international conferences (were) cancelled. This is unfortunate and unnecessary," he said.

"I would like to reassure the tourists, international community, conferences' organisers (that) the Uganda government has put in place measures to control outbreak of Ebola," he added.

On November 5, the government extended a three-week lockdown on Mubende and neighbouring Kassanda, the two central districts at the heart of the outbreak.

The measures include a dusk-to-dawn curfew, a ban on personal travel and the closure of markets, bars and churches.

Last week, the government announced plans to shut schools nationwide from November 25, two weeks before the scheduled end of term, after 23 Ebola cases were confirmed among pupils, including eight children who died.

The World Health Organization (WHO) said earlier this month Uganda had registered over 150 confirmed and probable Ebola cases, including 64 fatalities.

Uganda's last recorded fatality from a previous Ebola outbreak was in 2019.

The strain now circulating is known as the Sudan Ebola virus, for which there is currently no vaccine, although there are several candidate vaccines heading towards clinical trials.

Ebola is spread through bodily fluids, with common symptoms being fever, vomiting, bleeding and diarrhoea.

Outbreaks are difficult to contain, especially in urban environments.