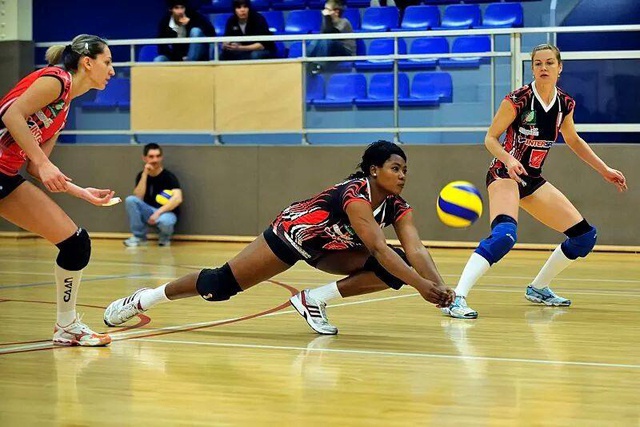 At least five former Seychellois professional volleyball players are set to light up the stage at this year’s championship which volleys off today at the Seychelles international sporting venue, the Palais des Sports, on the outskirt of the Seychelles capital of Victoria.

Three of the Seychelles teams competing in the regional event this year have at least one former professional player within their ranks amongst which the reigning IOCC men’s champion, Beau Vallon, that has three of its players who used to earn their living playing professionally.

Marielle Bonne however is the latest Seychellois professional player that has joined her local team Arsu just in time for the esteemed tournament after returning to her native land barely two weeks ago.

Bonne returned home after a five year spell in France where she has been involved with three clubs altogether, all hailing from the ‘Excellence’ division, one class below the ‘Pro-A league’ - the top volleyball tier in the western European state.

After proving herself worthy to join the Seychelles national team, that has known great success in the region having won multiple accolades on the African stage, including the African championship back in 2008 Bonne was scurried off to France in 2009 at the tender age of 18.

The young Seychellois lady initially joined ‘Tulle Naves’ plying her trade at the club for two years before she was lured to ‘Amiens’, a team from the same league that was mesmerised by her agility.

She evolved at ‘Amiens’ for a year before ‘Harnes’ came knocking as they bolstered their team in pursuit of ‘Pro-A volleyball’.

Bonne remained at ‘Harnes’ for the remainder of her professional career, but the chance to play in the much-anticipated ‘Pro-league’ never materialised.

The closest they got was a second place finish during her first year with the club, but that position worsened last year when they finished fourth.

Bonne who holidayed in Seychelles for two months during the closed season in France returned to the European nation recently for what was to be a third term playing for ‘Harnes’ but was back in Seychelles within a week. As she settled back home, fans and the local media alike have been struggling to come to terms with her homecoming and have questioned her swift return, perplexed as to what could have happened to cause the 23 year-old to cut short what appeared to be a promising and blossoming professional career.

SNA caught up with Mariel Bonne on Friday to find out what prompted the decision. Bonne explained that the allure of playing for Arsu once again had gotten the better of her.

“Arsu is my heart, it has been so long since I last played for them and I guess I got sentimental watching them in action while I was here on holiday,” she told SNA.

Bonne revealed that her mother, Jerina Bonne, herself an accomplished volleyball player domestically, is one to have fiercely questioned her return, noting that; “She wanted me to stay on and she insisted that I did. But it was my decision to make in the end and I wanted to come back home.”

She said she also remembered winning the IOCC with the team hailing from the southern part of the main island of Mahe on home turf in 2008, which convinced her further to come back as she wanted to relive the moment.

“It was one of the proudest moments of my volleyball career and it has lived on with me throughout the years. I want to relive the experience with by beloved team,” she stressed.

Bonne’s return has nevertheless come as welcoming news for Arsu, that has received a boost in morale and is once again enjoying a thriving spell in domestic competitions after being in the doldrums the last few years.

This was illustrated at last weeks’ Seychelles Volleyball Federation’s (SVF) cup final which Arsu won over the reigning champions Cascade, who will also be representing the archipelago at this year’s IOCC.

The trophy is the first won by Arsu in three years.

Bonne told SNA that Arsu played three times against Cascade ever since her return, noting that the first time she not involved and they lost the match 0-3.

“I played for the first time during the second match and although we lost 2-3, it was a marked improvement,” she stated.

The third time was in the SVF final which saw Arsu walk away with the trophy after dominating the match completely the score reading 3-0 at the end of the match.

How is Bonne coping with reintegrating her local team, after playing professionally for the last five years?

“Sometimes I forget that I am playing with local players, I tend to expect the same level of play I had become accustomed to while playing in France,” she told SNA.

“But I understand that it will take a while to re-adapt as we are less organised than the professionals. That is why I assist the team wherever I can, so it will make a difference at a crucial point during a match.”

“I have an open option to back after a year,” she affirmed. “The management, coaches and players (in France) were sad to see me go, and they have indicated that their door is always open if ever want to go back”.

“I’m very a very competitive player; I don’t enjoy being a substitute, so playing here for a year should allow me to get back to full fitness while I also address the small issue of my weight which has increased in the last year.”