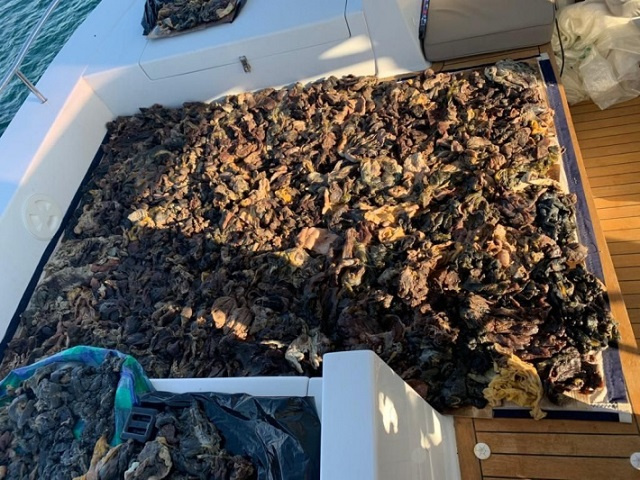 The three men were arrested after a large quantity of turtle meat was found in a search on the vessel they were in. (Seychelles Nation)

(Seychelles News Agency) - Three men arrested in possession of 100 kg of turtle meat during the weekend were released with conditions by the Magistrates' Court on Monday and will return to court on November 29.

According to a police statement on Tuesday, the boat's owner, a 46-year-old man from the eastern district of Cascade, and two men aged 24 and 19, were arrested after a large quantity of turtle meat was found in a search on the vessel they were in.

The boat was arrested around  Alphonse island on Saturday, November 5, in a joint operation of the Seychelles Coast Guard and the Marine Police.

"The concerned agencies, including the Ministry of Environment, were alerted of the discovery. The presumed turtle meat has been seized. The boat and its crew were escorted by the Coast Guard and the Marine Police to Mahe. Preliminary analysis of the meat confirmed that it was turtle meat of over 100 kg," said the police.

The three suspects have been released by the Magistrates' Court on the condition that they pay a fine of SCR 8,000 ($616) each, produce two persons as guarantees for a sum of SRC 100,000 ($7700) each, and surrender their passports to the court.

Additionally, the suspects have to report to the Central Police station three times a week and have restrictions on their movement from 7 p.m to 6.30 a.m. and they are not allowed to leave Mahe, the main island.

In Seychelles, an archipelago in the western Indian Ocean, sea turtles are protected under the Wild Animals and Birds Protection Act, under which the Wild Animals (Turtles) Regulations enacted in 1994, completely bans all disturbances, harvest, sale, possession of turtles, turtle products or eggs.