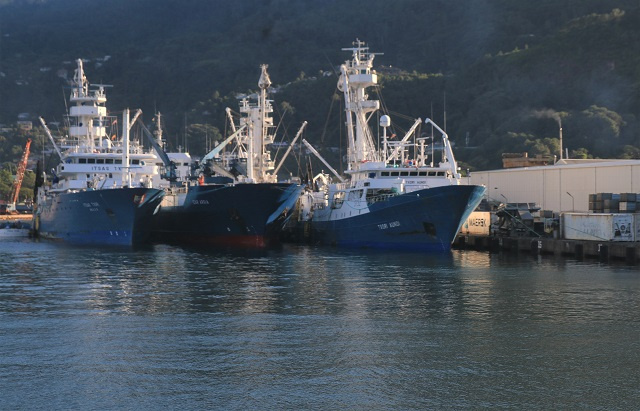 The new agreement will last for three years with a mid-term review after 18 months. (Joe Laurence, Seychelles News Agency)

Seychelles and Taiwan have negotiated a new fisheries agreement that will allow both of them to fish in each other's waters.

In the agreement signed recently, a number of changes have been made to the previous agreement to maximise Seychelles' gain from the fisheries activities done by these vessels.

The Principal Secretary for Fisheries, Roy Clarisse, told reporters that the changes made to the agreement are to ensure that it is transparent. He said there was a non-disclosure clause in the previous agreement that has now been removed to make it compliant with Fisheries Transparency Initiative's (FiTI) standards.

"Among the changes we have made to the agreement is reducing the number of boats that could fish in Seychelles from 240 to 100, which also forms part of our responsibilities as a coastal nation to ensure that we do not open our waters to all boats, but instead ensure responsible and sustainable fisheries," said Clarisse.

"We have also made changes to the modality of the license itself, where we saw in the past that boats took a six-month licence during the peak season of October to March. Now, they will no longer be able to do that, as the license will last up to the end of a calendar year," added Clarisse.

He said that if a boat takes a six-month license in October, it will expire on 31 December, meaning they will have to pay for another licence for the next year.

The new agreement will last for three years with a mid-term review after 18 months and to ensure maximum revenue for Seychelles, all these industrial fishing vessels will also now have to make at least one Port Call at Port Victoria per year.

"By having these vessels come to port, it will allow for more economic benefits and it can guarantee that fish from these boats can be processed locally, as well as benefits for Seypec, stevedoring among others, which will see us benefit from more than just the license fees as was the case previously," Clarisse explained.

Concerns with regard to monitoring the activities of these vessels were also raised and Johny Louys, the head of monitoring control and surveillance, said that Electronic Monitoring Systems (EMS) are expected to be put in use to monitor the vessel's activities.

This will be done along with other surveillance methods to ensure no illegal practices are being done by these boats.

Seychelles has three such agreements with the European Union, Mayotte and Mauritius.

Swedish tourists will return to Seychelles as soon as they are vaccinated, new ambassador says