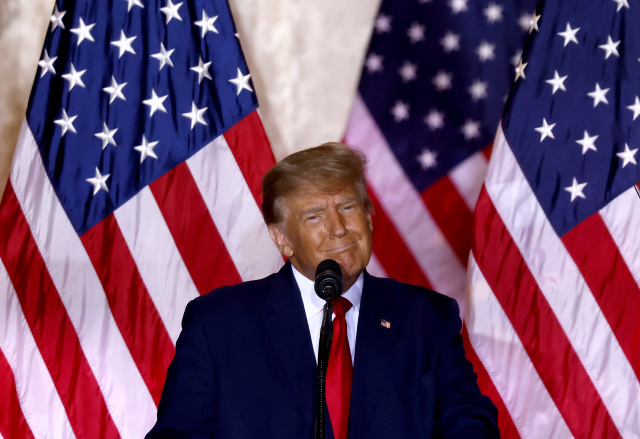 Former US President Donald Trump speaks at the Mar-a-Lago Club in Palm Beach, Florida, on November 15, 2022. Donald Trump pulled the trigger on a third White House run on November 15, setting the stage for a bruising Republican nomination battle after a poor midterm election showing by his hand-picked candidates weakened his grip on the party. Trump filed his official candidacy papers with the US election authority moments before he was due to publicly announce his candidacy. (Photo by ALON SKUY / AFP)

(AFP) - The patriotic music, fiery rhetoric and adoring crowd were all there as Donald Trump announced another White House bid, but -- in a sign his star has dimmed -- top Republican officials and even family members were no-shows.

Trump's announcement that he is running again in 2024 came exactly a week after a poor Republican showing in midterm elections, a performance some members of the party have blamed on questionable candidates backed by the former president.

The lackluster attendance may reflect a desire among some party leaders to turn the page on the divisive and legally challenged Trump and pick another candidate to carry the Republican banner two years from now.

Only a single Republican member of Congress was spotted in the crowd of several hundred people who attended Trump's kickoff event in a gilded ballroom at his Mar-a-Lago resort in Florida.

And that lawmaker, Madison Cawthorn of North Carolina, lost his Republican primary in May.

Another diehard Trump supporter, Representative Matt Gaetz of Florida, said he planned to attend but bad weather prevented him from flying to Palm Beach.

Trump's son Donald Jr was reportedly on a hunting trip out west and gave the same excuse.

As for Trump's eldest daughter, Ivanka, who played a prominent role in her father's 2016 and 2020 campaigns and his administration, she said she does "not plan to be involved in politics."

"I love my father very much," Ivanka Trump told Fox News Digital. "This time around, I am choosing to prioritize my young children and the private life we are creating as a family."

Her husband, Jared Kushner, did show up along with Trump's sons Eric and Barron.

Prominent Republicans who did attend were members of the far-right fringe of the party such as Roger Stone, a political consultant who was pardoned by Trump, and conspiracy theorists who voiced support for Trump's baseless claims that he won the 2020 election over Democrat Joe Biden.

Three former members of Trump's cabinet, ex-vice president Mike Pence, Mike Pompeo, who served as secretary of state, and Mark Esper, the defense secretary, made it clear on Wednesday they believe it is time to move on.

Pence told a CNN town hall event that he was proud of his time with Trump, a man he called "my friend," but that he was not what the country needed anymore.

"I think it's time for new leadership in this country that will bring us together around our highest ideals," he said.

Though he refused definitively to rule out support of Trump if he were to become the Republican nominee, Pence said he felt the party's primary process would offer alternatives.

"I honestly believe we're gonna have better choices," he said.

Pompeo, who, like Pence is a potential 2024 Republican nomination hopeful tweeted: "We need more seriousness, less noise, and leaders who are looking forward, not staring in the rearview mirror claiming victimhood."

Esper did not mince words in an interview with CNN.

"I think he's unfit for office," Esper said of Trump. "His actions are all about him and not about the country.

"I don't think he's an honest person," he added. "We saw the falsehoods in the remarks that came out of his mouth last night."

Larry Sabato, director of the University of Virginia's Center for Politics, said there is clearly a "lack of enthusiasm for Trump's third consecutive presidential campaign."

"Trump has cost them three elections and they'd prefer not to let him ruin a fourth in 2024," Sabato said.

While ridiculing Trump, the Post has been promoting his leading rival for the 2024 Republican nomination, Florida Governor Ron DeSantis, who emerged as the big winner from the otherwise disastrous midterms.

Trump did draw support from longtime ally Lindsey Graham, the Republican senator from South Carolina, who praised his speech.

"If President Trump continues this tone and delivers this message on a consistent basis, he will be hard to beat," Graham tweeted.

And analysts cautioned that Trump, who has defied the odds before, should not be counted out.

"The hard-core grassroots that have stood by Trump for six years will stand by him, for the most part," Sabato said. "The party leadership is mainly in another place entirely."

And for the time being, most polls show Trump leading DeSantis and other potential rivals for the Republican nomination.