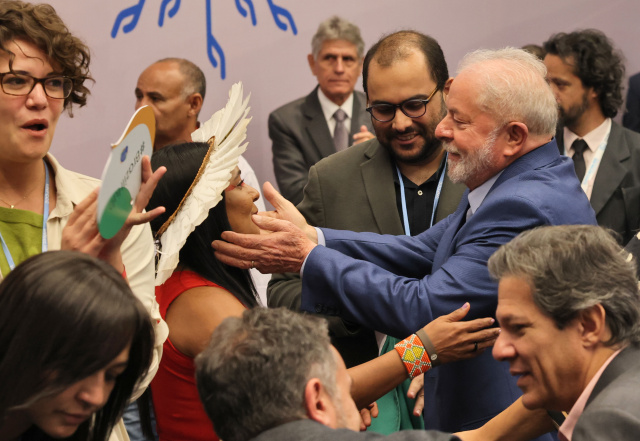 While G20 leaders meeting in Indonesia issued a final communique committing to pursue the more ambitious limits on global heating, action on the sidelines of fraught COP27 negotiations in Egypt generated momentum at the UN climate conference.

Lula kicked off COP27 events Wednesday with a call to host the 2025 climate talks in the Amazon region, in his first international trip since defeating outgoing far-right President Jair Bolsonaro, who presided over years of rampant Amazon deforestation.

"I am here to say to all of you that Brazil is back in the world," said Lula as he received a jubilant welcome from hundreds of people at an Amazon region pavilion in the Red Sea resort of Sharm el-Sheikh.

"We will put up a very strong fight against illegal deforestation," he said, announcing the creation of an Indigenous people's ministry to protect the vast region's vulnerable communities.

"There is no climate security for the world without a protected Amazon," Lula said later in a speech.

Lula arrived in Egypt on Tuesday and went straight into climate diplomacy, with meetings with US envoy John Kerry and China's Xie Zhenhua.

Kerry told a COP27 biodiversity panel on Wednesday that he was "really encouraged" by Lula's pledge to protect the Amazon, and that the United States would work with other nations to help protect the rainforest.

"We don't need to cause deforestation of even one metre of the Amazon to continue being one of the biggest food producers in the world," Lula said.

Speaking in Bangkok, where he is attending the Asia-Pacific Economic Cooperation forum, French President Emmanuel Macron threw his weight behind Lula's proposal for the next UN climate summit to be held in the Amazon.

"I ardently wish that we could have a COP in the Amazon, so I fully support this initiative of President Lula," he said.

In another boost to the UN climate process, the final communique from world leaders meeting at the Group of 20 talks in Bali, Indonesia, reaffirmed a promise to "pursue efforts" to curb global warming to 1.5 degrees Celsius above pre-industrial levels .

The G20 document also addresses the most contentious issue at COP27, as leaders urged "progress" on "loss and damage" -- the costs of climate impacts already being felt -- though without saying which approach they favoured.

Developing nations are demanding the creation of a loss and damage fund, through which rich polluters would compensate them for the destruction caused by climate-linked natural disasters.

But the United States and the European Union have suggested using existing channels for climate finance instead of creating a new one.

The G20 meeting was also the stage of a crucial meeting between US President Joe Biden and China's Xi Jinping, where the two leaders agreed to resume their climate cooperation.

Ani Dasgupta, head of the World Resources Institute, said positive signals from leaders at the G20 "should put wind in the sails" of negotiators in Egypt.

In another COP27 announcement, the EU said it would dedicate more than $1 billion in climate funding to help countries in Africa boost their resilience in the face of the accelerating impact of global warming.

In his speech, however, Lula took a dig at developed countries for failing to fulfil a pledge to provide $100 billion in aid annually from 2020 for developing nations to green their economies and adapt to future impacts.

"I'm also back to demand what was promised" at past climate talks, he said.

The president-elect, who previously served from 2003 to 2010, threw his weight behind the idea of a climate impacts compensation fund.

"We very urgently need financial mechanisms to remedy losses and damages caused by climate change," said Lula, who made a spectacular political comeback after serving jail time for corruption.

Latin America's most populous country grew more isolated under Bolsonaro, analysts say, in part due to his permissive policies towards deforestation and exploitation of the Amazon, the preservation of which is seen as critical to fighting global warming.

Brazil is home to 60 percent of the Amazon, which spans eight countries and acts as a massive sink for carbon emissions.

The incoming Lula administration wants the United States to contribute to the Amazon Fund, considered one of the main tools to reduce deforestation in the planet's biggest tropical forest.

Following Lula's victory, the fund's main contributors, Norway and Germany, announced they would participate again, after freezing aid in 2019 in the wake of Bolsonaro's election.