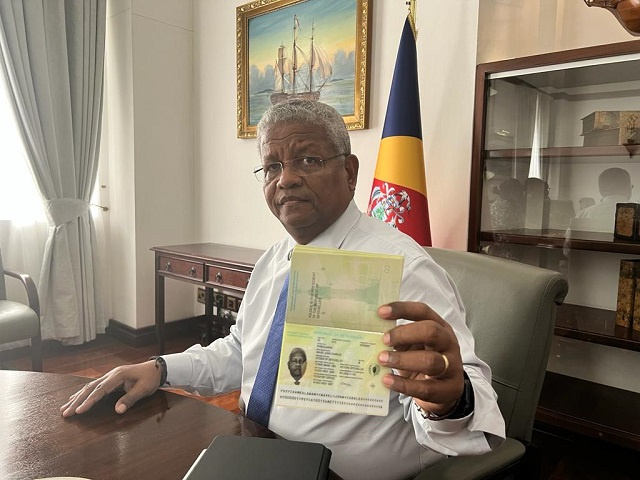 The first one was issued to President Wavel Ramkalawan on Wednesday. (Rassin Vannier, Seychelles News Agency)

(Seychelles News Agency) - Seychelles has introduced for the first time a new biometric passport for its citizens and the first one was issued to President Wavel Ramkalawan on Wednesday at State House.

The biometric passport has a microchip with data such as fingerprints, facial recognition and digital signature elements. The new passport also has some environmental and cultural features such as the flora and fauna of the country, the Seychelles clock tower and the Aldabra Atoll.

Seychelles' President said this "marks a new era in the immigration system in Seychelles and around the world. We are moving to the biometric passport. It is a passport that will be secure and it will not be easy for someone to duplicate it."

This has been made possible with the help of Groupe Imprimerie Nationale in France, a specialist in identity and secure digital services after the Seychelles' Internal Affairs department signed a contract for e-passports with the group on December 17 in 2021.

The Principal Secretary for Immigration and Civil Status, Alain Volcere, told reporters that the new e-passports are being issued to persons who urgently need to travel while other citizens will be issued with theirs as a new batch is printed.

Applicants will have to produce their identity card and birth certificate as well as documents to prove that they are Seychellois citizens and then they will go through some verification process. The cost for the passports will remain SCR 750 ($ 56.7) and every other procedure will be completed by the Immigration Department.

The chief immigration officer, Erica Dufresne, said that Seychellois living abroad will have to be physically present in Seychelles to apply for the new passport.

Meanwhile, the department said that they have a backlog of 454 applications for new passports since the printing machine broke down on November 7.

Dufresne told reporters that the "department will do its best to deal with the backlogs by the middle of next week, by handling urgent requests first. This will be possible with the use of two printers that will be able to print 40 passports at one go."

During the time of the breakdown, the department had issued passport extension documents but unfortunately, this was not accepted by countries like Dubai and South Africa.

"This is because at the border control the immigration officers use scanners that read the bio page which contains a security code and the scanners do not read the manual extension," said Dufresne.

"As a result, many travel agencies advised their clients against travelling with those documents because some receiving countries will not accept them and this has caused some inconvenience," she added.

Volcere has apologised for the inconvenience that this may have caused.

General » Be a reporter: Write and send your article » Subscribe for news alert
Tags: biometric passport