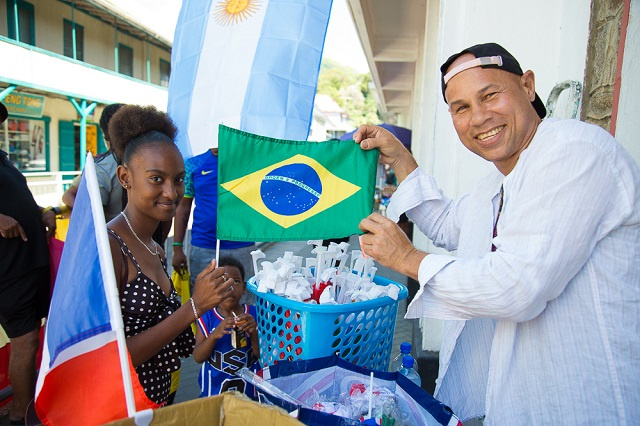 Local businesses have also made plans for the tournament while people are buying the flags of their teams. (Jude Morel, Seychelles News Agency)

The 2022 FIFA football World Cup will kick off in Qatar on Sunday November 20 and last until December 18 with 32 teams vying for the coveted trophy.

While Seychelles has never participated in the prestigious tournament, with football being a much loved sport on the island nation, the country's population always looks forward to the tournament, where flags of the various nations adorn cars and houses over the course of the competition.

With many people already making their predictions about the tournament, SNA decided to find out reactions as to which teams they feel are favourites to win the tournament this year.

Ralph Jean-Louis, Principal Secretary for Sports, said, "I support Argentina and of course, I think they will win it because they have the best player in the world, in the shape of Lionel Messi."

Another Argentina supporter, football coach Cliff Nolin, said "I support Argentina because they've always played attractive football and have produced quality players as Alfredo Di Stefano, Mario Kempes, Maradona, Messi. There is a big possibility Argentina will win, but in football, nothing is certain, as there could be referee errors, injuries and bad luck."

Madiha Philo, a former journalist, is an England fan and said, "I don't think they will win the World Cup, but after their performances at the Euro I think they will give any nation a run for their money. I feel France will be able to defend their title."

"For this World Cup, I am supporting England, where I lived for many years before coming back to Seychelles. Of course, England will win and take the cup back to the home of football," said Ralph Volcere, editor of the Seychelles Independent newspaper.

"I support England, obviously. I live in England. I hope they will do okay, but there are a lot of good teams in the competition," Michael Mancienne, a Seychellois Burton Albion defensive midfielder.

There are also supporters of Brazil "with their talented young players they are always a favourite. I think the climate in Qatar will be to their advantage," said - Lisa Rene-Cosgrow, Seychellois karting champion.

Another local sportsman, high jumper, Lissa Labiche said "I enjoy how Brazil plays and I think they will win it."

"On paper, Brazil is looking good and they might meet Argentina in the semis. On the other side of the bracket is France, with Mbappe and who is on form, Benzema. My view is France will meet Brazil in the final, with Argentina finishing third," said Ulric Mathiot, a sports consultant.

"Brazil all the way! Why? Football is life in Brazil and they have a great track record of winning the tournament, so I am rooting for them," Stephanie Duval, National Olympic Academy member.

"I have always supported Brazil from the times of Pele, and Ronaldo. I just like the passion and style of their game. Who to win? Brazil or Germany," said Dave Rene, former karting champion.

With so much support for the nations at the World Cup, local businesses have also made plans for the tournament, with numerous restaurants, bars and nightclubs providing screenings of all the live matches, which will kick off with the opening game on Sunday night.