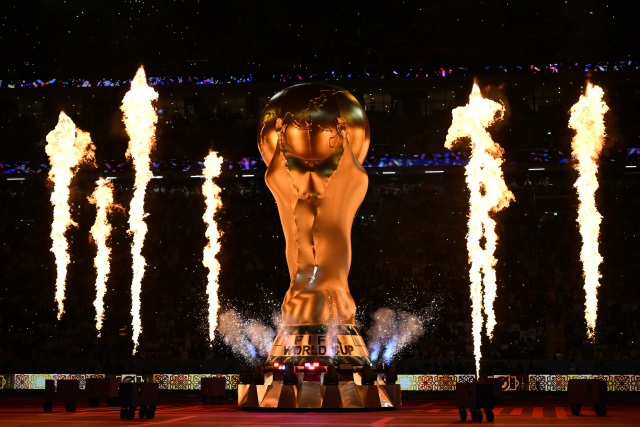 Fireworks explode around a replica of the FIFA World Cup trophy during the opening ceremony ahead of the Qatar 2022 World Cup Group A football match between Qatar and Ecuador at the Al-Bayt Stadium in Al Khor, north of Doha on November 20, 2022. (Photo by Raul ARBOLEDA / AFP)

(AFP) - Qatar became the first World Cup hosts in history to lose their opening match, going down 2-0 to Ecuador on Sunday as football's showpiece got under way after 12 years of turbulent preparations.

Qatar has spent $200 billion on a remarkable construction project to host the World Cup after the tiny Gulf state shocked the football world by winning the right to host the tournament in 2010.

A crowd of 67,372 packed into the impressive Al Bayt Stadium, modelled on a traditional Bedouin tent, for the opening ceremony.

Ghanim Al-Muftah, a Qatari activist for the disabled, born with the rare Caudal Regression Syndrome, appeared with Freeman and stated to the crowd: "Everyone is welcome".

Ecuador thought they had made a dream start within three minutes when they silenced the home fans as Enner Valencia headed in, only for the goal to be ruled out by VAR for offside in the build-up.

Thirteen minutes later, Ecuador did take the lead after Valencia dribbled round Qatari goalkeeper Saad Al Sheeb who grabbed his shin and the referee pointed to the spot. Valencia coolly rolled home the penalty.

Qatar coach Felix Sanchez said: "The atmosphere was one of great expectation. We are sorry that we could not be part of the party, but we knew that this scenario could happen... We will try to learn."

The Al-Bayt venue is one of an array of new stadiums built for the most expensive World Cup in history.

Excitement has been slow to build but on Sunday police had to close the World Cup fan zone in Doha for a second consecutive night when it became overcrowded, witnesses said.

The FIFA Fan Festival, near the Doha seafront, has a 40,000 capacity and gates were closed with thousands waiting outside.

AFP correspondents saw police pleading with revellers in the dark to move back from the gates but no injuries were reported. Police on horse back were brought out to control crowds.

A Qatar organising committee official, speaking on condition of anonymity, told AFP: "When it's full it's full. We would be criticised if we did not close when it reaches capacity."

Qatar has predicted that more than one million fans will come to the Gulf state for the month-long tournament that ends December 18.

World Cup organisers hope the start of the football will quell the controversies that have overshadowed preparations.

On Saturday, Infantino went on the offensive in an aggressive rebuttal of the criticism aimed at the event.

"I don't want to give you any lessons of life, but what is going on here is profoundly, profoundly unjust."

Controversies look certain to rumble on well into the tournament.

Several European nations taking part -- including England, Germany and Denmark -- have said their players will wear rainbow-coloured "OneLove" armbands in a gesture of solidarity with the LGBTQ community. Homosexuality is illegal in Qatar.

The move raises the prospect of disciplinary action from FIFA, which has unveiled plans to make its own alternative armbands available to teams.

Infantino insisted that all World Cup visitors would be welcome regardless of sexual orientation.

Defending champions France suffered another injury blow as star striker and Ballon D'Or winner Karim Benzema was forced out of the tournament.

The Real Madrid star limped out of a training session on Saturday with a left thigh injury.

The French federation later confirmed the 34-year-old would play no part in the competition.

"I am extremely sad for Karim, for whom this World Cup was a major objective," said France coach Didier Deschamps, who has decided not to replace the forward.