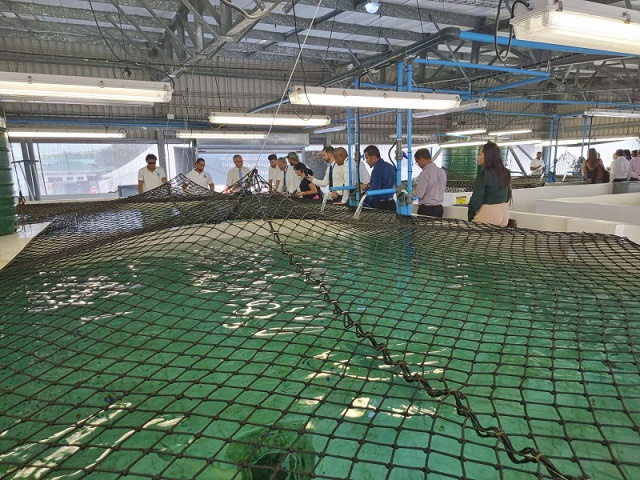 Delegates from the BlueInvest Africa Forum in September visited to the Broodstock, Acclimation and Quarantine Facility (BAQF) in Providence. (Seychelles Nation)

(Seychelles News Agency) - The aquaculture sector in Seychelles is showing pleasing progress as more people understand the concept, said a top official of the Seychelles Fishing Authority (SFA) on Monday.

The sector was officially launched in October last year with a call for applications for a licence.

“When we first started, people really did not fully understand the concept, but with time, they have begun to see its potential and showing much more interest in it,” said Veronica Alphonse-Uzice, the assistant manager of aquaculture at the Seychelles Fishing Authority.

Aquaculture is a new industry in Seychelles, an archipelago in the western Indian Ocean. The industry is targeting new and existing local entrepreneurs and business owners who want to venture into the new sector to diversify their business portfolios.

Industrial aquaculture got the first boost in October 2019, when SFA opened a broodstock, acclimation and quarantine facility at the Providence Fishing Port. The facility – the first of its kind on the islands - was funded by the European Union under the fisheries sectoral fund.

Alphonse-Uzice said she is very pleased with the number of applications SFA is receiving.

“People are not only looking at fish but also to other species as well, such as coral farming, seaweed, prawns, and others, with many approaching us about investing in such businesses,” she explained and added that fish is not really a species that many people are looking towards.

Aquaculture is part of a mariculture master plan for Seychelles that started in 2007 and the government made a decision to develop the plan in 2011 as part of its plan to diversify the economy of the archipelago in the western Indian Ocean. The plan is to help reduce pressure on the fisheries sector, the second top contributor to the Seychelles' economy after tourism.

According to Alphonse-Uzice, 14 applicants have submitted their applications, but she believes there could be more in the coming months. The SFA is already preparing to issue licence to seven successful applicants during the week.

“The effect of the sector on the country will be a positive one, where of course it will provide another source of income to the country, as well as enlarge our seafood basket, allowing people to have more choices and give a more diverse range of seafood for export,” added Alphonse-Uzice.

While the private sector is expected to be the main investor in the sector, SFA will continue to provide support, with testing and experimentation, which will allow those involved to get the most out of their stocks.